June 22nd, 2007 – We are officially in Ireland. We’ve arrived in Ireland, we’ve slept in Ireland, and though provided from a steam table buffet, we’ve eaten an Irish breakfast.

Bottom line? The last half hour of breakfast service in a jam-packed, mid-rate hotel banquet room is no place to be introduced to blood pudding.

The five of us (my wife Peg, our daughter Nicole, our friends Greg and Lorraine, and I) pile into our rented big red van and venture off into the Irish countryside.

For about ten minutes.

There are a lot of tourists there.

And despite recommendations to the contrary, we found it worth visiting.

Bunratty gets your toes wet.

You’ve never seen a real castle before, never walked the streets of a fake Irish village. Here’s a perfect opportunity to scratch both off your to-do list, bucket list, never-thought-about-it-list, whatever.

There’s been a Bunratty Castle for almost 600 years, much of that time spent as the stronghold of the fearsome O’Brien clan. The castle’s sky high and thousands of square feet of no bullshit gray rock. All towers, turrets, and skinny windows. Banner flags fly royally atop the highest sections. 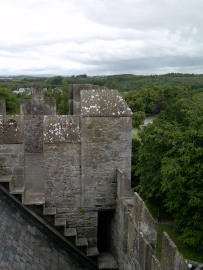 The village below consists of structures removed from various parts of Ireland where their existence was no longer desired, like the main runway at Shannon Airport, and reassembled behind the walls of this architectural retirement village/work camp.

The buildings are of simple, yet compelling, construction, appropriately furnished. There are homes of watermen and farming families from various rungs on the social ladder. Inside the modest Loop Head House a nesting chicken was busy laying an egg on the bed. A rooster strutted around out front and I heard variations of cock-a-doodle-doo in at least half a dozen languages, every one of them funny-sounding. 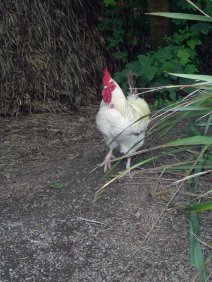 On the village main street there’s a doctor’s office completely equipped for bleedings, leechings, and who can imagine what else, a post office, pawnbroker, and, of course, a pub and a church. At the schoolhouse class is in session. The in-character instructor was teaching us Irish. He cracked the desks with his pointer and scowled at our lame pronunciations of Ta’ An La Go Brea. At the end of the lesson, he did however give out delicious jelly candies that just happened to be for sale at the Bunratty candy store.

In the fields and barnyards there were deer and donkeys, pigs and peacocks. In the souvenir shoppe: their human equivalents.

Bunratty was our first chance to overspend on kitschy knickknacks and high priced thingamajigs. I’m typically resistant to most travel merchandising, but even I joined in the shopping frenzy of shamrocks, leprechauns, and Celtic design. Only Nicole was able to maintain the noncommercial detachment required from the savvy traveler. 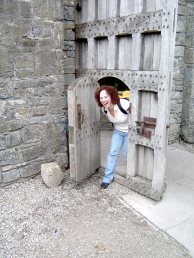 We skipped the nearby world famous pub, Durty Nelly’s, in the interest of getting to our next stop, the harbor-side hamlet of Kinsale, at least a couple hours south. 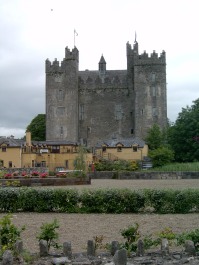 We went to Ireland with the philosophy it’s better to see a few things slow than everything fast.

It was already looking like we were really just going to get to see a few things fast.