Sitting on his porch looking out over Cox Creek, 91-year old George Walters contemplates what an Eastern Shore waterman’s life was like back when he was a kid.

“That kind of work kept your muscles strong. We’d walk to the boat a mile, mile and a half. Then we’d row out to our boat before heading out to oyster.”

In his heyday, George was known to be among the sturdiest of oystermen.

“I worked long tongs up to thirty feet. Any longer than twenty-nines or thirties, the wind gets into them. Most people worked shorter tongs. If you worked longer tongs you could work virgin territory instead of places that had been all worked over. The deeper you got, the fewer boats working, the more you’d catch and what you caught was bigger.

“First boat I ever owned,” George says, “was a forty-foot tuck stern built by a guy down in Wittman. I think my brother and I both got boats from him. Then I had the box stern Miss Doris later. She was built further down the bay. But I started on a log canoe with a single cylinder engine. Anything that got you out and back without having to row was good.”

George learned his trade from his father, John Quincy Adams Walters. “You’ve got to know where you’re going and what you’re doing. You can’t just go out there and make a living. You’ve got to learn. Get out there with somebody else.”

“But once you were on your own, nobody could tell you what to do.” He grins. “Nobody could keep you from working on the water.”

John Quincy and his wife Lilian Mae Twigg Walters “came down from Baltimore and liked what they found here.” The couple had four children: John Newman, the oldest; George, born on February 26, 1920, Elinor, and then Alice, called Sis. Elinor grew up to marry Thomas Ringgold. Sis married Thomas’s brother Bernie. In the years that followed, Bernie built so many Purple Martin birdhouses, newspaper articles were written about the “Birdman of Love Point.”

The sisters have been gone a few years now. Newman died the June past.

George‘s family were typical islanders of their time. “My father worked on the water. In the summer we’d raise a garden, crab a little bit. In the winter you picked up tongs and went tonging. All the money we knew came from oysters.”

George’s dad died. The family always believed he had some type of hand infection that might not have been properly diagnosed or treated. Like many young Shoremen of his generation, the opportunity to make an immediate living on the water outweighed any advantage of an education, so George quit school. He later obtained his GED.

Drafted in World War II, George served in the Pacific theater. Upon returning home, George married Doris Legg, a Kent Point farmer’s daughter. The couple had two sons Eddie (Seaweed) and Gary. George, along with his partner Billy Schulz, developed a reputation for enterprise and hard work with their seven-day a week, twenty four-hour a day crab potting operation.

Looking for a more stable income as the waterman’s life took its toll, George found employment with Maryland’s Department of Natural Resources Police.

The state soon came into possession of a donated 65- foot 1956 Dutch yacht built by the De Vries shipyard for Marge Schott, the privileged wife of a wealthy Ohio business heir, and destined to be the controversial owner of the Cincinnati Reds. Other high-profile owners of these custom built seagoing status symbols include Henry Ford, Paul Allen, and several Saudi sheikhs. 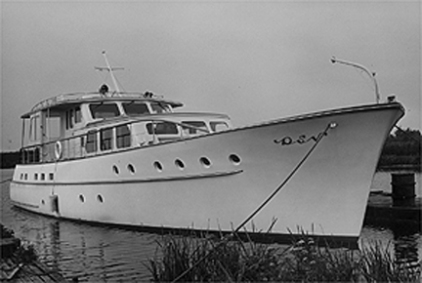 Famous guests rumored to have climbed aboard this particular pleasure craft include JFK and Marilyn Monroe. Supposedly, Logbook#3, which could substantiate a clandestine passenger list, is missing.

Schott sold the DSV (Double Schott V) to the radio and TV entertainer Arthur Godfrey, who sold it to a Maryland banker who donated her to the state. Somewhere along the line, she’d been renamed the 50/50. Wasn’t much made of the acquisition. The official state yacht, the 100-foot Maryland Lady now had an off-the-radar little sister.

George, an experienced bay captain, was chosen to take the helm.

For the next decade or so, “as long as they had her,” George and his first mate, Joe Johns, from Neavitt, navigated the 50/50 up-and-down-and-all-around the Chesapeake, in every kind of weather, and under every kind of circumstance.

George won’t spill any secrets he may or may not have from his days skippering the 50/50 for Maryland Governors Agnew and Mandel, but he hints he has a few.

A tease and it’s time for lunch. A family member brings him soup and a small sandwich.

“A man has to keep up his strength,” says George Walters.

Our interview is over.