“Censorship is telling a man he can’t have a steak just because a baby can’t chew it.” – Mark Twain 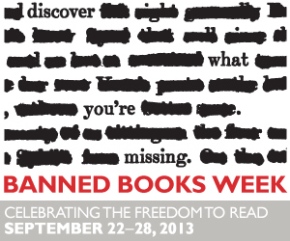 The idea is repellent to most Americans.

But that doesn’t stop some Americans from trying some times.

Every September, with Banned Books Week, the American Library Association brings together book lovers of every stripe to celebrate freedom – the freedom to read, to write, the freedom to provide and access information and opinion and thought, the freedom to express ideas that may be nonconformist, unpopular, or even perhaps, in the eyes and minds of some, offensive.

Some readers believe The Scarlet Letter is pornographic and Nathanial Hawthorne took it too easy on that slut Hester.

Mark Twain’s The Adventures of Huckleberry Finn, first banned as “trash and suitable only for the slums,” is now often challenged for racist character portrayals and language, though a hundred twenty eight years after publication, and maybe another fifty since Huck’s fictional adventures took place, the world of Twain’s American jewel feels absolutely authentic to me, and the anti-slavery theme seems evident in the humanity of the characters.

And the coarseness readers found in the book for half a century now seems beyond-Andy Griffith quaint.

My all time favorite challenged classic novels include John Steinbeck’s The Grapes of Wrath (vulgar language, sexual references, and socialist propaganda), Catch-22 by Joseph Heller (vulgarity and anti-authority themes) and One Flew over the Cuckoo’s Nest by Ken Kesey, which was born the same year as me and was eventually made into my all-time favorite movie.

Nickel and Dimed by Barbara Ehrereich, the Autobiography of Malcolm X, and Truman Capote’s In Cold Blood are nonfiction favorites that have been challenged or banned a number of times.

The science fiction genre is particularly ripe for pushing the envelope of ideas and pissing people off in the effort. Bradbury’s Fahrenheit 451 (1953), Vonnegut’s Slaughterhouse Five (1969) and Orson Scott Card’s Ender’s Game (1985) have all come under fire from book burners.

A couple weeks ago I posed a question to my Facebook friends about their favorite books. To Kill a Mockingbird topped the list of responses by far. Yet, based on profanity, racial themes, and the realistic portrayal of rape, there have been many challenges brought against Harper Lee’s masterpiece since it was published in 1960.

Among books that have been challenged or banned are a couple so popular they’re known by their acronyms almost as well as they are their titles. That’s right, devotees of TLOTR and GWTW, your beloved little Hobbits and southern belles have been called on the carpet too.

Earlier this year, the Chicago school board tried to limit the availability of Marjane Satrapi’s graphic novel Persepolis due to the depiction of the real life racism and violence that Satrapi was exposed to in her Iranian youth and the book’s questioning of authority, class structures, and gender issues,

The book is banned in Iran, but in America it was not to be. Students mobilized on Facebook and Twitter, checked out all available copies, wrote blogs, staged protests, contacted the author for support, and appeared on TV and radio to plead the case for literary freedom.

The school board issued a notification that educators were to ignore their earlier notification.

Listen, there are books I’d remove from the shelf if I could decide for everybody else what was acceptable to read.

But who knows, in 100 years, Fifty Shades of Grey might be The Scarlet Letter of its time. 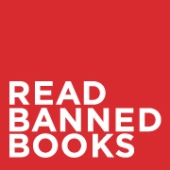