“I seen Chessie once.”

Burle Shoalwater continued, “I did. We were handtonging up at Gum Thicket, and I seen that seamonster come up about a hundred yards off our bow. Split-second. Saw his head first, than a scaly coil, a tail slap, and he was gone. Happened so fast I hardly believed my eyes. Slimdamned Chance, he seen it, too, but since its Slimdamned I ain’t gonna officially claim him as a witness.”

“Seen a ghost once, too,” my business partner told me. We each own half of the workboat Hell’s Belch. “Eighth grade,” he said, “right around Thanksgiving. Miss Kay kicked me and Wayne Tyde off the school bus for being pains in the ass and we’d walked down to the fishing pier. By the time we headed home it was almost dark. We watched the last bit a that big ol’ sun sink into the bay over Craney Creek, and it was like somebody turned the lights out. No stars, nothing. Black as Bruce Lee’s belt.

“Me and Wayne, we were jostling along, trying to scare each other with the different stories about the ghosts, and witches, and willow-the-wisps we’d always heard about down there, so of course we didn’t get a hundred yards down the road, when we heard what sounded like trotting hoof beats coming from the bean field behind us. Me and Wayne we started jogging a bit, trying not to act scared, but as it got closer, it got louder than coulda’ been real. Sounded like twenty, thirty horses. Man, we took off! Right about then a car came out of one of those dirt lanes and I jumped right into the headlights. That old dude just about run me over. I opened the back door and me and Wayne piled in. We were so freaked out, old dude took us both all the way home. And you know what, Skeeter?”

“When I got nerve enough to look out that back window, off in the field I saw a man in a white shirt on a horse…and neither one of them had a head!”

He shifted in his seat. “You ever hear your old man talk about that witch used to live down by the marsh? Locals stayed away, but big town cars with New York plates use to roll up to her shanty, spend an hour or so, and roll out. They used to say she put curses on people.”

“They don’t usually know what they’re talking about.”

“And you yourself saw a UFO fly out of the Chester River once.”

I couldn’t say he was wrong about that, so I said, “You got a point, man?”

“My point is,” Burle looked at me like I was stupid, “as scary as all that stuff was when we were kids, it’s got nothing on what kids today’ve got to be afraid of. All my boy has to do is turn on the first few minutes of almost any newscast…”

I couldn’t say he was wrong about that, so I just said, “You definitely got a point, man.” 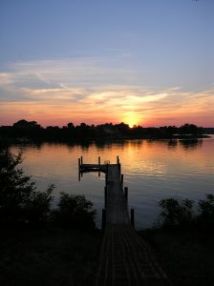