Wes and Bobby, bachelors with more than a couple marriages between them, have been roommates in Chester for the past few years. They say they get on each on other’s nerves sometimes, but to see them together their strong fraternal bond is obvious.

One of their earliest shared memories is of the epic 1933 Chesapeake-Potomac hurricane. Bobby starts, “Grandfather had a brother lived in a boat house down Little Creek. We went to check on him. The water was so high Smitty Crouch’s (oyster) buy boat was tied to a barn up on the hill.”

“The boat was tied to Elmer Golt’s barn,” adds Wes, “about 500 yards from the shoreline. When the tide went out, we just went along picking up soft crabs were the tide had left them in the field. From where I stood, that storm was lots stronger than Isabel (in 2003.)”

The Thompsons, one of Kent Island’s oldest families, have always built things.

“Our father and grandfather would leave and go work on big construction jobs” says Wes. “Grandma Thompson’s father was head man building the Conowingo Dam. Our father got caught between cement forms and fractured his skull. He was never the same. He had terrible headaches and died when he was fifty.”

Their neighborhood was tough. “If you were born up and down through Dominion,” Wes says, “you didn’t have to win every fight, but you sure had to show up for them.”

He says, “Buck Tull hit me in the head. I ran all the way home from school. Our old man saw me and asked what’s that knot on your head? I told him Buck Tull hit me with a brick – he hadn’t, he hit me with his fist. My father said why ain’t you fighting him? I said because he’s the meanest kid in school. Old man said you better try and whip him, or you can try me. I told Bobby – we went out in the woods and cut two poles about big around as broomsticks and about four foot long. Buck Tull came by our house every day on his bicycle. Me and Bobby hid in that big ditch and here he come. He saw us and started peddling real fast. Bobby ran out and drove his stick right through the spokes of his front wheel, and ol’ Buck Tull went rolling.”

“His sister was on the back of the bike,” says Bobby. “They both flew off.”

“His sister was meaner than he was. We had to fight them both. Of course, I was taking the hide off him with my stick. Buck Tull was mean, but not as mean as those clubs.”

Bobby laughs and says “We never had no more trouble out of him after that.”

Like most young men of their time and place, both brothers quit school to make a living.

Bobby says, “I remember working with Uncle Paul and Uncle Ellison (Coleman). I culled 102 bushels of oysters and made four dollars.”

Wes bought his first boat when he was fifteen or sixteen. “For crabbing. A log canoe. Bought it for twenty dollars,” he says. “Be worth forty, fifty thousand now, who knows.” He shakes his head. “Grandpop and his brothers built log canoes, too. Bobby used to follow the old man around, learned how to carpenter with him. I got in a boat so I wouldn’t have to listen to him holler. He wasn’t mean, but he hollered.” 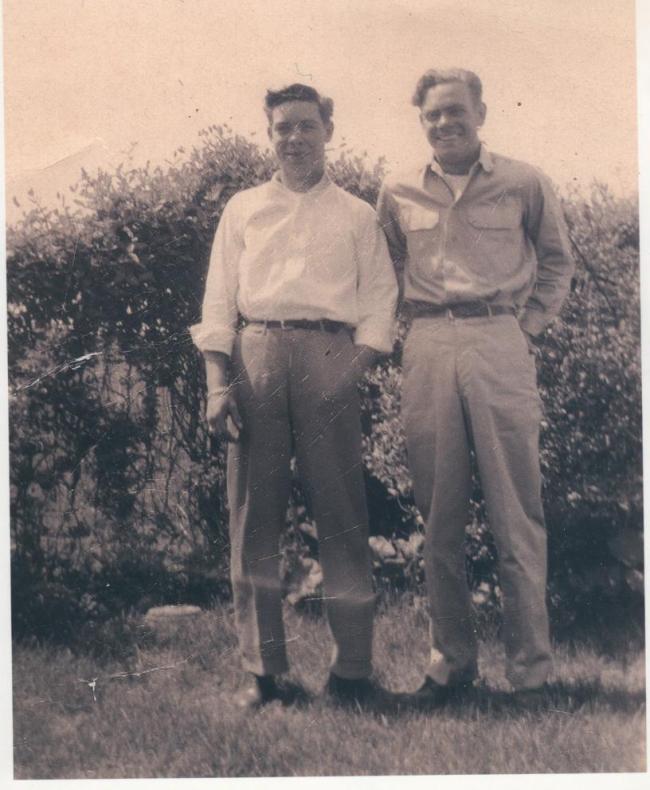 Both brothers served their country in World War II. Wes was part of the Army’s 79th division which landed in Normandy’s Omaha Beach on June 8, 1944, D-Day plus two. Bobby served in the Navy on the destroyer U.S.S. Craven and convoyed across the north Atlantic six times in less than eighteen months. “Twenty eight days over and three days back,” Bobby says. “Sometimes we wouldn’t even get off, we’d just reload and go, never come ashore.”

Wes made Private First Class 4 times and” got busted down every time.” When he was ready to muster out, “The guy at Fort Meade come along and said reenlist, we’ll make you a corporal. I said I get back across this bay and get to my boat I’ll be a captain.”

“We built everything down the Narrows at one time,” says Wes. “I built almost all of United Shellfish, Fisherman’s Inn. Bobby built Annie’s. Bobby changed with the times. He became a much better carpenter than the old man was.”

Bobby says, “I built Annie’s, the Poseidon Inn back then, for Earl Seward and stayed there until I was eighty four. Forty years.”

Wes took to hunting and fishing as a kid. “Grandfather Thompson was Superintendent of Sunday School at Kingsley Church in Chester for 28 years. When I was a little boy he wouldn’t let me go fishing unless I went to church. Of course, I’m sitting in the front row. Couldn’t wait for it to be over but I was going to be there.”

With regards to hunting, Wes says, “Wasn’t until the corn picker came around (in the 1930s), leaving all those stalks in the field, that’s when we first started getting geese here. There weren’t any deer either. First deer I ever heard of, a fox hunter saw tracks down Kent Point and we all jumped in pickup trucks and went down there just to look at the tracks.”

For years, Wes was an expert-level guide, and still hunts and fishes for fun as often as possible. Bobby builds found-lumber models of Chesapeake Bay watercraft –bugeyes, buy boats, box stern workboats and such – by eye. “Takes me six months, a year,” he says. “The skipjack I made, I just went down and looked at the one at Kent Narrows (the restored skipjack the Anna Garvey at the Chesapeake Exploration Center) and started making it. When I feel good I can get one done pretty quick.”

Its noon and the VFW’s serving lunch, so it’s time to wrap up our interview so the Thompson brothers can go grab a bite to eat and socialize a little. “Maybe chase a few ladies around,” Wes laughs, boisterous and joyful.

His eyes smile with well-practiced mischief. They say, “Don’t put it past us.”

Bobby Thompson passed away on January 1, 2014. This profile was originally published in the December 2013 issue of the Kent Island Heritage Society newsletter.