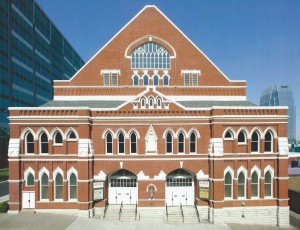 The Ryman Theater is where the Grand Ole Opry used to be.

Back when “country was country”, as purists both inside and outside of Nashville will tell you given half a second and a Pabst’s Blue Ribbon beer.

Originally built as a tabernacle by a saloon-wealthy sea captain for an anti-vice, anti-capitalist preacher, the Ryman Theater hit the big-time in the radio days, with Opry stars like Roy Acuff and Minnie Pearl, along with such classical or mainstream entertainment luminaries as Marian Anderson, Katherine Hepburn, and Bob Hope,  who also also performed on the Ryman’s famous stage.

The Ryman was where bluegrass music was “born”.

After the Opry moved up the road to its fancy new Opryland digs in 1972, the Ryman fell into disuse and disrepair.

Facing the wrecking ball, the Ryman Theater was brought back to relevancy through a pro-active city government, public support, live shows featuring both local and national acts, and tourism.

To prove that last part, we took the Backstage Tour which was worth the few extra bucks. We saw the Johnny Cash (where Johnny met June) dressing room and the Hank Williams dressing room. It says something about the relationship between rebellion and transcendence that two of the Ryman’s most celebrated alumni are dudes who got booted out of the Opry for misbehavior.

We stood onstage to have a docent take our picture. He took his time and and chatted us up as if there was no line of people behind us waiting to have their pictures taken too. Our above-the-Mason-Dixon-line instincts kicked in and we hustled the process faster than the docent did.

The Johnny Cash Museum is pretty damned cool, too. Lots of audio-visual candy for those of us who have been plugged in pretty much since birth. From his early days as a substance-fueled anti-establishment nonconformist, to his Willie-Waylon-Kris Outlaw period, to his heartbreaking American Series final act with producing mastermind Rick Rubin, Johnny Cash remains a symbol of individualism that stands beyond race, politics, and musical preference.

We saw our second pair of Carl Perkins’ Blue Suede Shoes. They seemed to be everywhere. 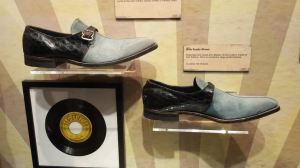 Then we saw the stand-up comedian Ralphie May. 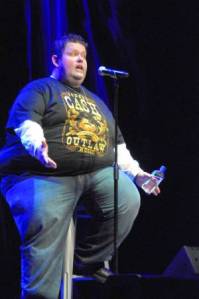 We arrived at Zanies Comedy Club just as the doors opened. We told the hostess it was two of us, and she led us right to the front of the stage, where we shared a table with a young local couple who shared a lot of our interests. The second act, Ralphie’s funny, beautiful wife:

Lahna Turner, didn’t make fun of me, but both the opening comedian and the big man himself took shots.

It’s a risk you take sitting in the front row of an A+ comedy show.

They never saw my banged up fivehead, though. I kept my ball cap on all night.

Even with the brain damage, I’m no dummy.

We crashed on Thanksgiving.

It was part of the plan.

We hung out in our hotel room, rented a movie, went to the gym. Because I had three band aids on my fivehead, I could not swim laps in the hotel pool like I wanted.

Our getaway was ending.

We ate a fancy Thanksgiving dinner in a fancy Nashville restaurant.

The next morning, a driver picked us up to take us to the airport. Like a particularly nosy 8-year old with control issues, I talk to people a lot. I can’t help but badger everyone I meet with questions, and I asked our driver where he was from, how long he’d been in our country, and how long he’d lived in Nashville.

He said Nashville was a wonderful city, that it was safe, and growing, and everybody was nice. He said he loved Nashville, in fact, he said he loved living in America. He loved the freedom, and the opportunity, and the friendliness of Americans.

I asked our driver, Quulle, about his family both here and in Somalia, and I asked him how long it had been since he’d seen his still-living father, “my daddy” he called him, and his many, many siblings in Africa.

Quulle said he hadn’t been back to Somalia in sixteen years, but in fact, he was leaving that afternoon, it would take the weekend to get there through Istanbul and Mogadishu, and he’d be there until February. He said his daddy was getting very old, and if he didn’t go now, he was afraid he may not see him again. He said he was working a few hours early that morning to pad his wallet a bit more before he left.

Quulle was excited and, with good reason, nervous about the trip. He was happy when he talked about visiting his African family, but he was fearful of his native country. “It is a very bad place,” he said.  And he wasn’t bullshitting. Somalia is a war-torn terrorist hotbed, rife with evil, poverty, and disease, and is possibly the most dangerous country on earth.

But people that Quulle loves still live there, and he was going to see them, most likely for the last time.

“I will,” Quulle said, “be anxious to come home, though. I have been in America 22 years, and America has been so good to me, so good to my family. America is my home. I love America so much. I am blessed to have been able to live here.”

Peg and I were touched, and in that moment, we found one more thing to be thankful for.

The cynical part of our nature later wondered if our driver hadn’t worked an emotional con just to ensure the quality of his tip.

Like all the best cons, I led him to where we ended up, I asked all the questions that gave him an opportunity to share his story with us. If I got conned, I definitely conned myself.

Even though I don’t really believe it, perhaps our driver saw us coming, and if so, well, more power to him.

Because you can bet your pair of Carl Perkins’ Blue Suede Shoes that that’s the American way too.

In 2014, we missed Thanksgiving dinner with the family, but we gained one more almost-perfect notch on our travel belt.