“It was just a piece of marsh,” Betty Thomas Schulz wrote about Kent Narrows in  2005’s Fisherman’s Inn Cookbook: A Collection of Local Flavors, History and Memories, “nothing on it but muskrat beds, two small grocery stores and some oyster houses on water’s edge.”

Betty was born to Anna May Ruth of Grasonville and William Alexander Thomas, Captain Alex, on July 23, 1924. In 1925, Alex, a waterman since the age of nine, moved his family to Baltimore to make a better living by getting in on the city’s roaring-twenties industrial opportunities. A son, Harold, was born to the young couple striving to make a better life.

The Great Depression eliminated thousands of those upwardly-mobile boomtown jobs.

The Thomases came home to the Eastern Shore.

Oscar ‘Sonny’ Schulz was born on Kent Island, in what was once called Devil’s Dominion, in 1933.  His mother’s family, the Cloughs, were of local heritage, but his paternal grandparents had emigrated from Germany.

Oscar and Maude, Sonny’s parents, had two children before Sonny was born. A sister, Charlotta, died at the age of four after eating a poisoned peach. The fruit had been sprayed with arsenic and Dr. Sattelmaier, another German émigré, was unable to get to the child in time. Sonny later learned that losing her daughter, “almost killed my mother.” Brother John was much older than Sonny and died at the age of fifty.

Sonny’s father was an oysterman and a carpenter who struggled with his health. In World War I he’d survived a mustard gas attack, the long term effects of which were progressively debilitating. Sonny was eleven when his father died.

Despite the financial difficulties he and his mother faced, Sonny graduated high school, a feat not necessarily common for farm boys and the sons of watermen.

Sonny has always been ambitious.  “I’ll never forget the first day I made five dollars,” he says.  “Billy Schulz, my cousin, had a bicycle he was going to sell because he bought a car. He wanted five dollars for it. So mother said whatever I made that day I could put toward the bicycle. I picked a hundred bushels of tomatoes. Made five dollars.”

Mother Maude Schulz was industrious, too. She was employed by the Thomas family. The Thomas’ owned a little business at Kent Narrows. Downstairs was a restaurant. Upstairs were four guest rooms. They called the place Fisherman’s Inn.

Betty wrote in her book that the original Fisherman’s Inn “was just a small building with a small living room and two bedrooms on one side. The other half of the building served as a dining room. The kitchen was where we ate. It had a small front porch entrance and three gas pumps out front, selling Atlantic gasoline. Route 18, the only road crossing from the Island to the Narrows, was just outside the front door.

“My mother had noticed folks were hungry by the time they stopped for gas, as it was a long trip to the Eastern Shore and the ocean in those days. Traveler’s, hungry and thirsty, began inquiring after a place to eat. She started feeding them crab cakes and soft crabs sandwiches in that little dining area that seated 26 people.”

In 1931, during the heyday of Kent Narrows’ status as a serious player in the Chesapeake Bay’s seafood harvesting business, Alex Thomas opened an oyster packing house.

Despite early indicators of potential success, the Depression was worsening and money remained tight for years.

As when he originally purchased his property, no bank would loan Alex the money to expand, so once again a private investor, a Queenstown contractor named Johnny Cole, lent what was needed to build that upstairs section with the 4 guest rooms.

Betty took over the restaurant part of the family business when her parents separated in 1945. Additional Kent Narrows acreage was purchased in 1943, 1944, and 1951. 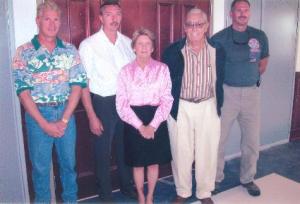 Betty stayed involved with her family business while Sonny worked on the water. Eventually, her father divided his Kent Narrows property between Betty and her brother, Harold. It was about that time, Betty wrote of the original Fisherman’s Inn, “We were outgrowing the old building which had a lot of problems after being added on to so often.

Sonny remembers that, “Traffic was increasing eight to ten percent a year and business wasn’t increasing at all. We decided in 1969 to take a chance and build a new restaurant. We opened the Monday after Mother’s Day 1971.”

Sonny thinks about that memorable day for just a moment and then adds, “We burned down December 23rd, 1980.

“That was a bad Christmas.”

“…Someone riding by late at night saw smoke,” Betty wrote, “coming out of the roof and called it in.

“It was really a cold, cold, long night.”

Sonny says, “We (had) left around 10. When the alarm went off around midnight, we came back down.”

Sonny’s and Betty’s sons Jody and Tracy are longtime members of the Kent Island Volunteer Fire Department’s and have held leadership positions for years. Jody told me “Tracy and I were on one of the fire trucks (that night) when we saw this car flying up the highway behind us. We looked over as the car went past and it was our mother.”

Sonny says, “It was so cold the fire department’s ladder truck froze.”

Betty wrote, “At first the fire seemed to be contained, though the odor of smoke was prevalent. No one saw any flames. It later turned into an inferno. When the firemen broke through the roof, and the air got in it sent their ladders everywhere.

“When they made a hole in the roof,” Sonny says, “the windows exploded.”

KIVFD firefighter and longtime Schulz family friend Marc Grollman remembers, “A bunch of us were inside fighting the fire. (Chief) Calvin Duncan came running in for everybody to get out quick. Just leave the equipment. Seemed as soon as we got out to the parking lot, we turned and it started caving in, and then it was over…” 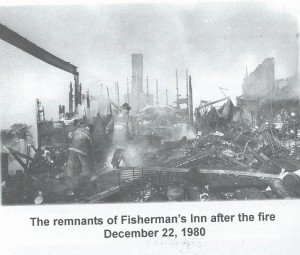 “A week later,” Sonny says, “we burned what was left to finish the job. We hauled out 90 truckloads of debris. We started rebuilding in February 1981 and opened back up five months later.”

Today’s Fisherman’s Village – Fisherman’s Inn, along with Fisherman’s Crab Deck and Seafood Market, which opened in July 1991 – employs about 200 people during the summer, and half that through the winter months. The weekly payroll is in the tens of thousands of dollars.

And that’s a lot of money generated into the community from what was once, back in the Great Depression, a little family business.