Online files available at the John F. Kennedy Museum and Library include folders full of correspondence between the office of President Kennedy’s secretary, Evelyn Lincoln, and “individuals and organizations both known and unknown to the President.”

Also in that file is a telegram from Angie Dickinson.

On the real estate.

With the intent of constructing a research laboratory, a company known as the United Nuclear Corporation purchased Pioneer Point in 1969. Local businessmen were thrilled, but neighbors and conservationists were “horrified,” according to Wye Island: Insiders, Outsiders and Resistance to Change, Boyd Gibbons’ classic book about a rural community (specifically this particular rural community) waging war against development.

In this case, resistance from the locals proved insurmountable. United Nuclear pulled out.

Baltimore-born land developer Charles Rist had made a name for himself in the neighboring state of Pennsylvania. Rist’s construction company, Charnita, was known for building huge recreation-oriented luxury subdivisions and, according to Boyd, carried a reputation “for the ultimate in land sales razzle-dazzle.”

Boyd says Rist, with his sights set on Pioneer Point, was six-foot-seven and 300 pounds, and a “towering, blustering figure” who bulldozed his way into county meetings with his big self and his big pronouncements. Rist declared to one and all that he planned to turn the old Raskob estate into a resort featuring a mix of potential building sites and more than 1,000 condos, a huge convention center, a yacht club, a “boatel,” and a couple golf courses.  He handed out glossy flyers featuring seaplanes and men in yachting caps.

Decades later, after finding a development plan for Pioneer Point Resort in a box of materials donated to the county library, Dan Tabler, columnist for the Record-Observer newspaper, wrote: “It was mighty detailed as to how the Charnita firm in Pennsylvania was going to turn the (at that point in time) 1,600-acre estate into a major development with a large hotel looking out over the Corsica and Chester rivers at Town Pointe where Raskob’s main residence, Hartefeld House, and Mostley Hall stood.”

Queen Anne’s County officials told Charles Rist it would take about three years to properly assess his proposal’s impact on their county and the surrounding region.

Rist didn’t have three years. His company Charnita was losing steam. Deemed unsuitable for construction, Pennsylvania slapped a moratorium on most of his building lots, including lots at his dream ski resort, also named Charnita. Multiple lawsuits were being filed against him in a number of jurisdictions. His fortune and his reputation were on the line, and everywhere he went he seemed to feel maligned and prosecuted for his success.

Pre-Twitter, in March, 1970, Rist took out space in the Gettysburg Times to address the ski resort issue with the pubic on his own terms. “Dear Friends,” he wrote. “I have been waiting patiently for months for the Tri-County Citizens Committee to show their true colors…” He opined that in a recent planning committee meeting, his opponents, “through their excitement and anxiety,” betrayed their feelings that “Charnita has become too large, grown too fast, that it is crowding them out.” Rist argued that the No-Growth policies of the community activists threatened jobs and property values.

In an effort for “all citizens to be heard,” Rist called a meeting at his ski lodge, and requested all concerned citizens and regional officials attend. He wanted to know if voters were “going to continue to allow a few, in the minority, to harass and destroy the lives and income of a majority because of a mistaken belief that they can continue to live in their own “Little Utopia …?”

Apparently, the voters were going to do just that.

Rist’s ski resort project went bankrupt. Now finished, at a much smaller scale than originally planned, the project was purchased by an outside company and renamed Ski Liberty, which was later again renamed. Today, Liberty Mountain Resort in Fairfield, Pennsylvania is still a popular, if modest, regional skiing destination.

About the time Charnita was going belly-up, Rist walked away from Pioneer Point.

“People here don’t want change,” he told the Bay Times in his angry, self-aggrandizing style. “This area hasn’t progressed for 100 years. I’m being harassed by half a dozen nuts. Mister, every nickel I’ve made goes right back in the land – this is my life. Everybody wants to take potshots at me;” he said. “I’m successful.” 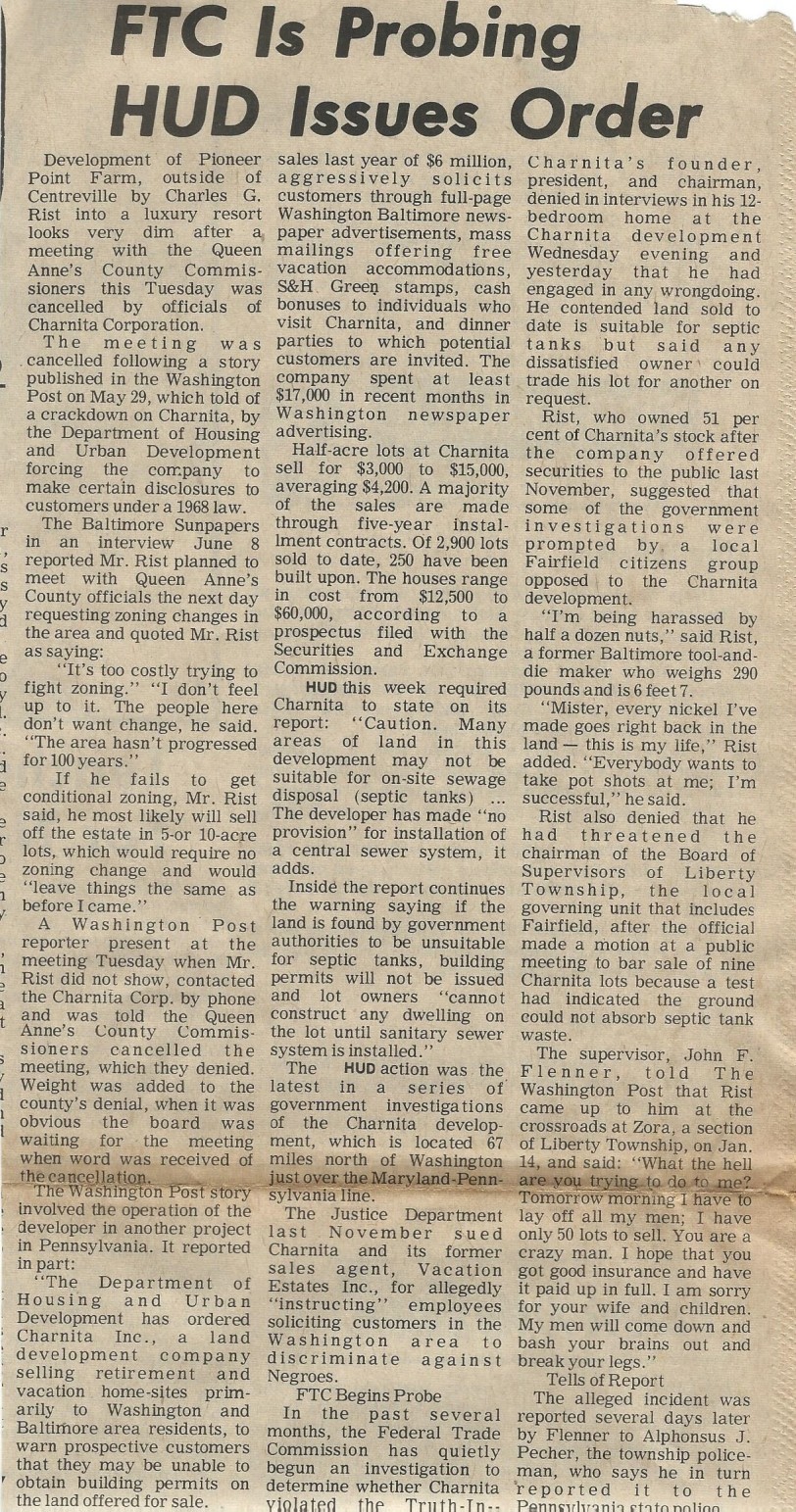 In March, 1972, in an effort to raise capital, Rist sold off 45 acres of Pioneer Point, including some prime waterfront and John J. Raskob’s two historic manor houses.

He sold it to the Union of Soviet Socialist Republics. The USSR. The Russians.

In 1975, at the age of 49, Charles Rist was killed by an employee at a North Carolina emerald mine that Rist owned.

He was shot three times in the chest with a .357 Magnum.

A domestic dispute between Mr. & Mrs. Rist appears to have been the catalyst for the shooting. 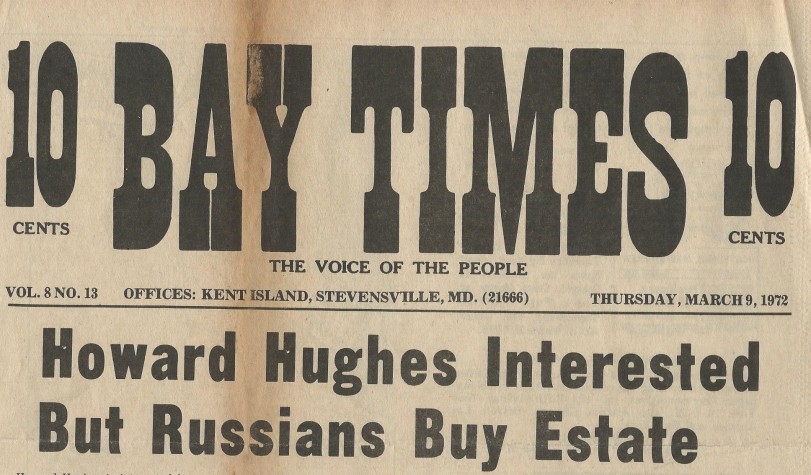