1952 – THE SUMMER OF THE CHESAPEAKE BAY BRIDGE & THE FLYING SAUCERS

The citizens of Maryland’s Eastern Shore were saying goodbye to the era of the Chesapeake Bay ferry system, the last in a long heritage of regional travel and commerce vessels servicing the communities of the bay and it’s tributaries, communities gone virtually unchanged for generations, and were saying hello to a whole new way of life. As July began, the end of the month loomed heavy with speculation, excitement, and in many cases, fear over what the future might hold. A bridge, long pondered and heavily debated, linking the Sho’ to all points west, was to soon open.

And then the Flying Saucers started appearing in the sky. 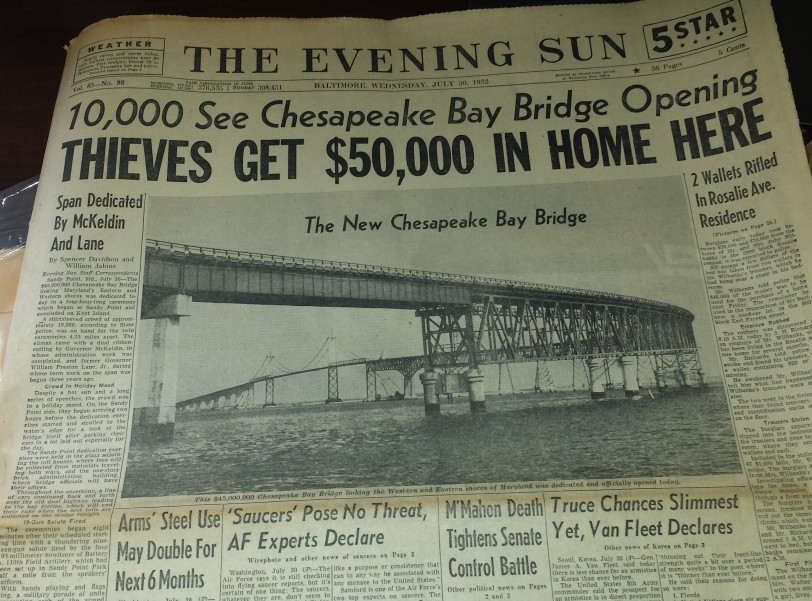 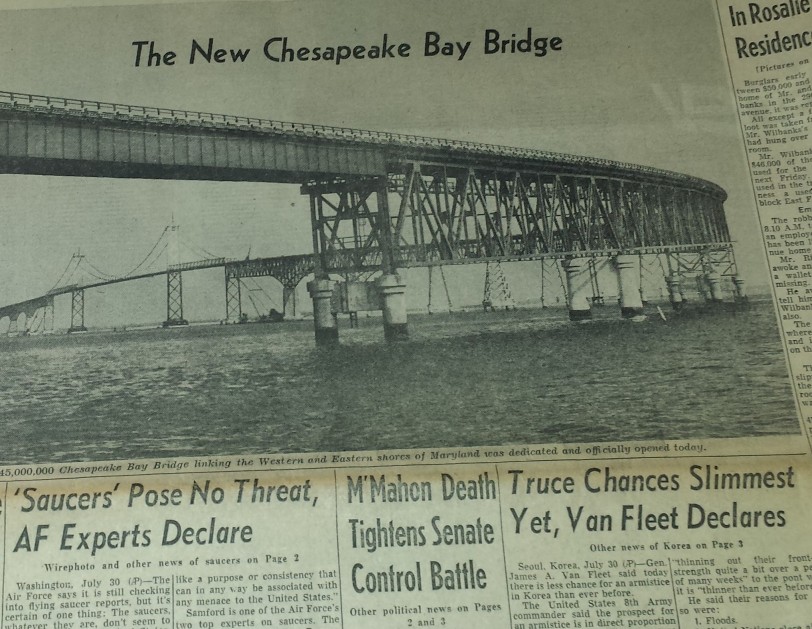 The topic of building a Chesapeake Bay Bridge was first raised as far back as the late nineteenth century. During the First World War, about the time the War Department of the United States was eyeballing Kent Island as a potential site for a weapons proving ground, a serious proposal was made to construct a bridge, but a consensus was never met, and the double whammy of the Great Depression and a second global conflict stalled any hopes of building what was a dream project for many and a nightmare proposition for many others.

In 1947, as ferry traffic was estimated to be increasing by 1000,000 vehicles a year, a determined Governor William Preston Lane Jr. pushed legislation and construction plans for the bridge were finally authorized. Protestations included the Baltimore Sun editorial that proclaimed that if the state waited another 40 years, “automobiles will be as out of date as trolley cars. People will have fly-mobiles and won’t need bridges to cross the bay.” 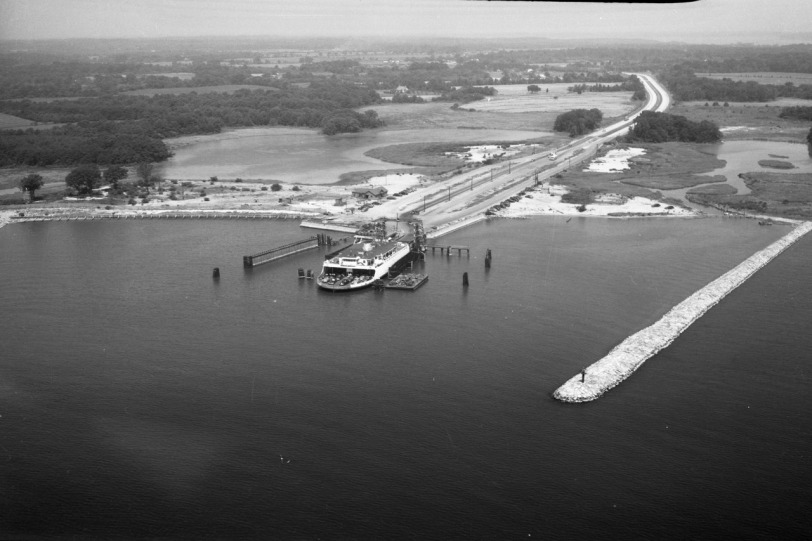 According to Michael Ryan’s book, The Third Kind: A Compendium of U.F.O. Encounters, the July 1952 flying saucer sightings, called the Invasion of Washington by some, began at 11:40 p.m. on Saturday, the 19th when Edward Nugent, an air traffic controller at Washington National Airport (known today as Ronald Reagan Washington National Airport) “spotted seven objects on his radar. The objects were located 15 miles (24 km) south-southwest of the city; no known aircraft were in the area and the objects were not following any established flight paths. Nugent’s superior, Harry Barnes, a senior air-traffic controller at the airport, watched the objects on Nugent’s radarscope.”

Harry Barnes later wrote, “We knew immediately that a very strange situation existed . . . their movements were completely radical compared to those of ordinary aircraft.”

Two other controllers, situated in the airport tower, confirmed to Barnes that not only had they observed the radar blips on their own screens, but that they were at that very moment looking out the tower windows at “a a bright orange light,” controller Howard Cocklin said. “I can’t tell what’s behind it.”

Things got weirder from there.

Objects appeared all over the airport’s radarscopes.

When they moved over the White House and the U.S. Capital Barnes called Andrews Air Force base. 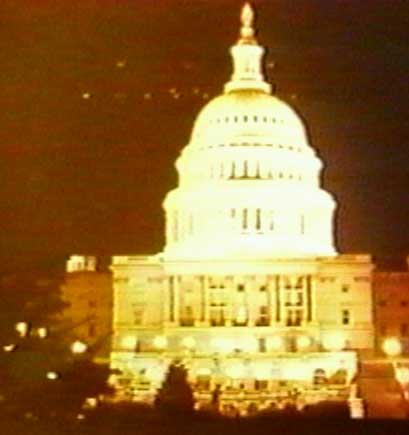 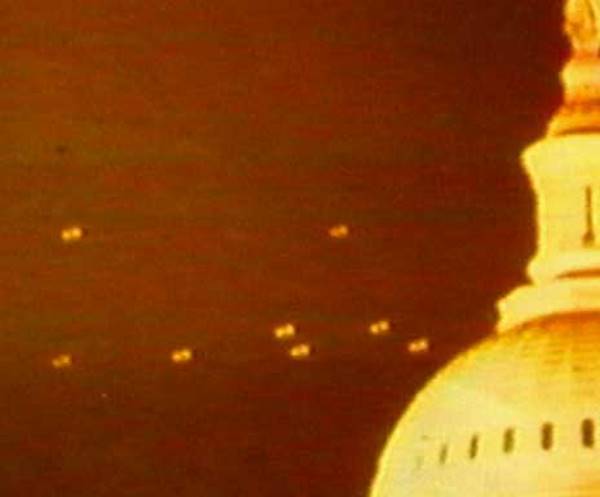 Nothing was reported on the screens there.

Then, and airman in the tower there reported an “orange ball of fire, trailing a tail…unlike anything I had ever seen before.”

It “took off at an unbelievable speed.”

A pilot at National, waiting for his own permission to take off, saw what he thought was a meteor, and then told the tower that he detected unknown objects closing in on him.  Six “white, tailless, fast-moving lights,”  he said. Barnes confirmed each ping on his screen and when the pilot reported the lights “streaking away” according to Michael Ryan, they also disappeared off radar.

As jet fighters from the air force base in New Castle, Delaware,  were nearing the nation’s capital, around 3 a.m., all the objects “vanished from the radar. However, when the jets ran low on fuel and left, the objects returned.

The next weekend, at 8:15 on Saturday, July 26, a pilot and stewardess flying into D.C. reported strange lights above them, and in no time the radar screens around the area were going berserk again. At times the objects moved slowly, and were then calculated to be traveling at speeds up to 7,000 mph. Air Force Lieutenant William Patterson attempted to engage four white-glowing “bogies” but at max speed, gave up when he saw zero chance of catching them. The unknown objects in the sky were seen throughout the night by a number of aerospace professionals and civilians alike from the seats of power in Washington to the southern reaches of the Chesapeake Bay watershed. 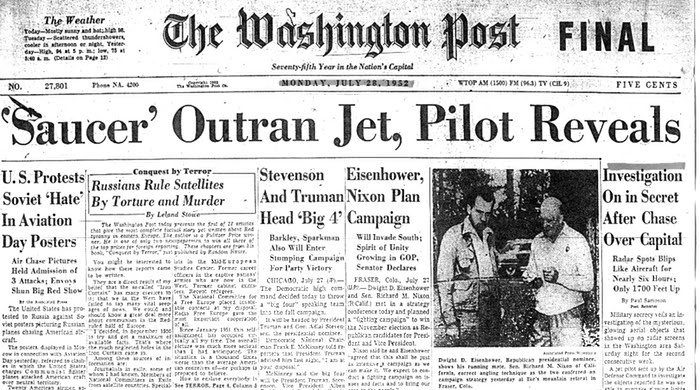 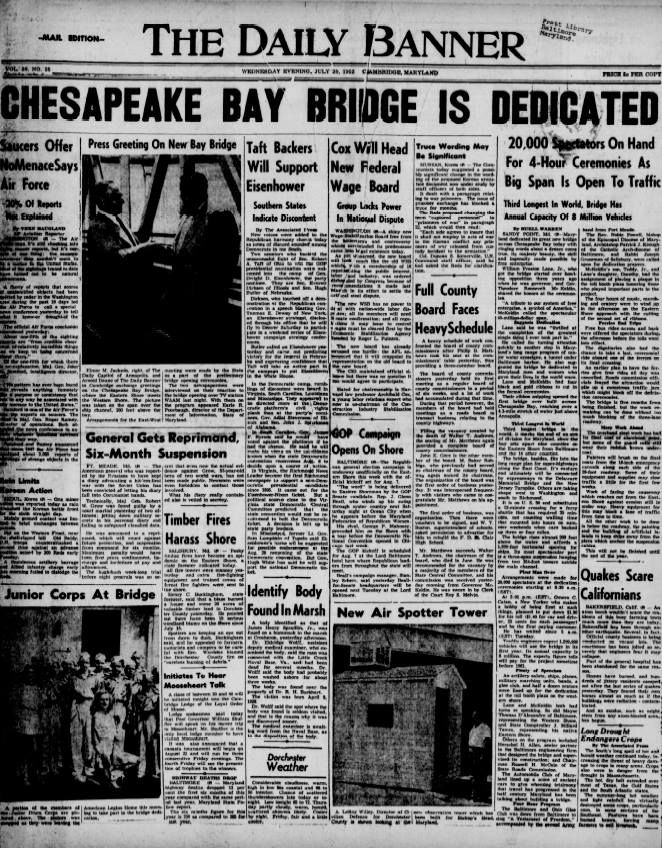 A caravan of buses, antique cars, and politicians of every type made the first trek eastward across what was at the time the world’s third longest bridge, and the longest continuous over-water steel structure on earth.

It may have felt like some kind of invasion to certain Eastern Shore folk. 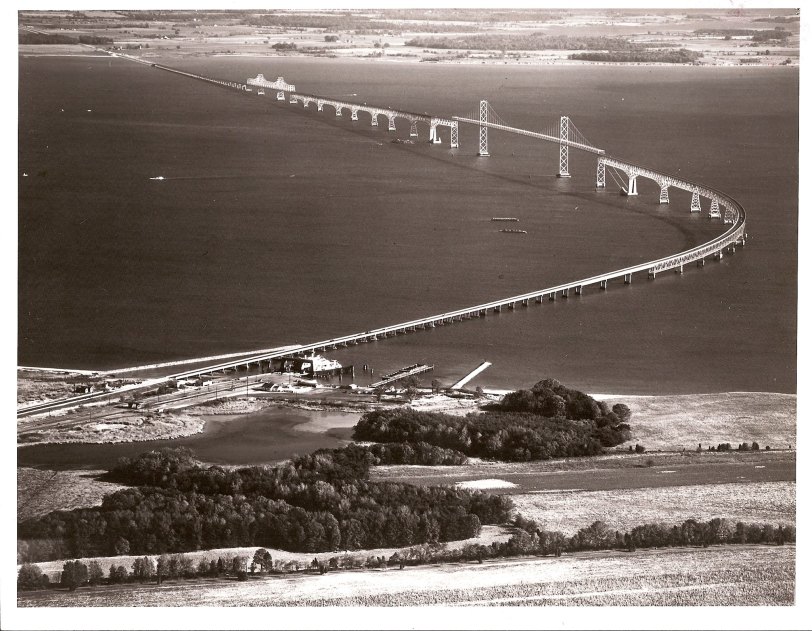 Underneath, the ferries made what no one doubted was one last sentimental trip across the Chesapeake Bay.

What was going on overhead that summer is still debated.

The official Air Force explanation is temperature inversion, a meteorological condition where temperature rise with height, and misidentification of such natural and man-made lighted objects as meteors, stars, and city lights.

That theory is criticized and dismissed by both UFO aficionados and eyewitnesses to the events of July, 1952.

It is the standard of today’s national security apparatus to only comment on sightings of unidentified flying objects that have been determined solved. 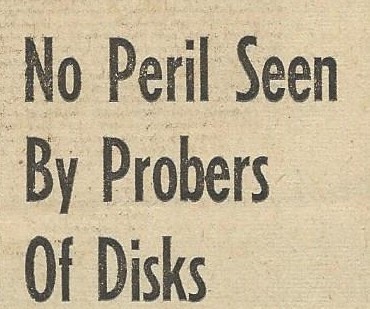 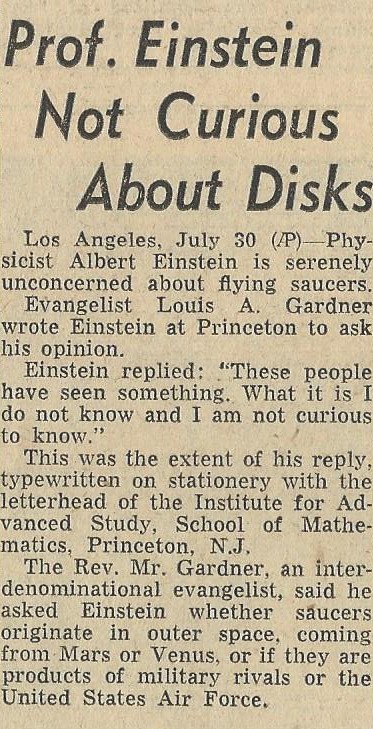 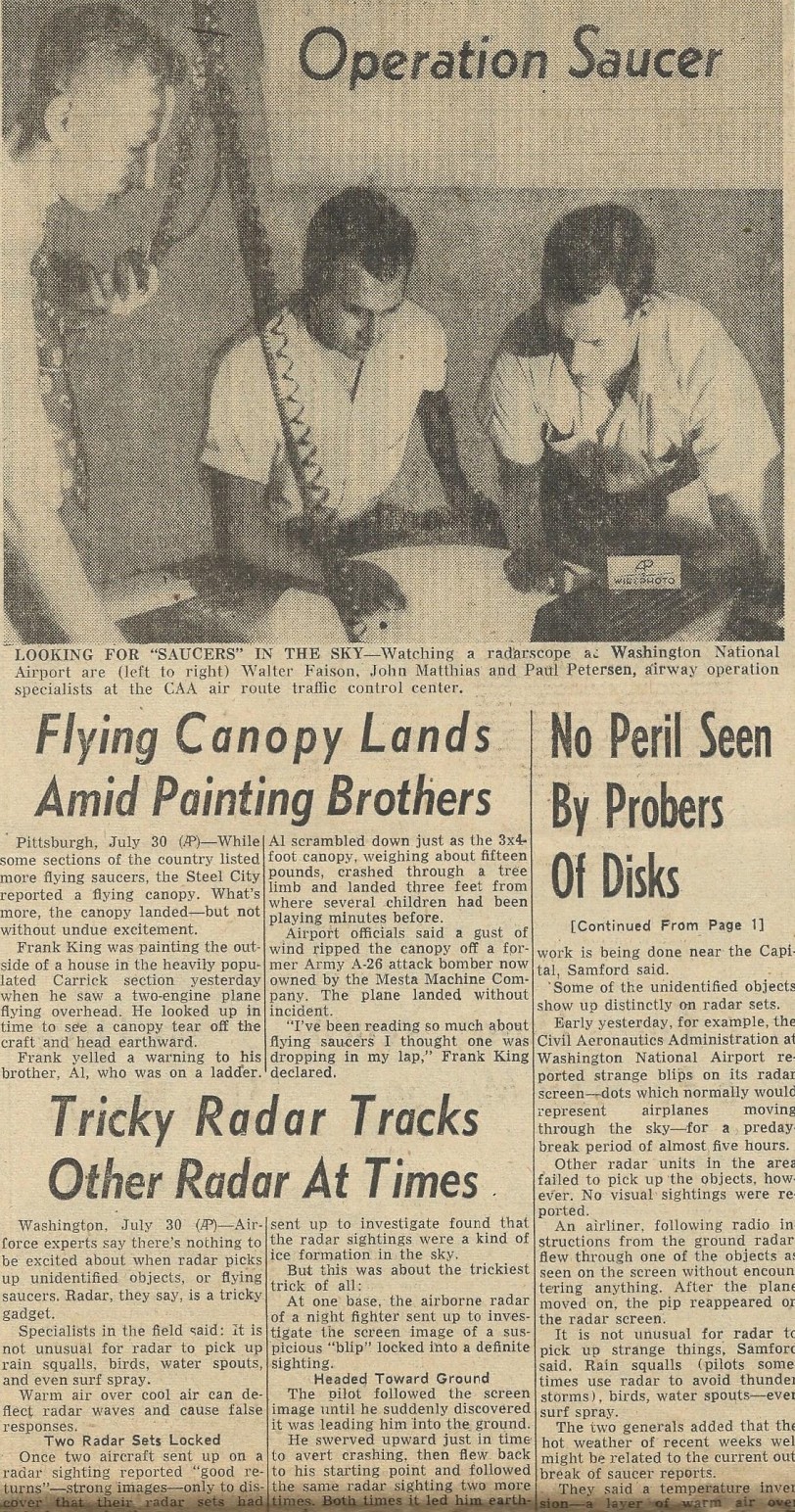 HOPE TO SEE YOU ON SATURDAY, SEPTEMBER 16 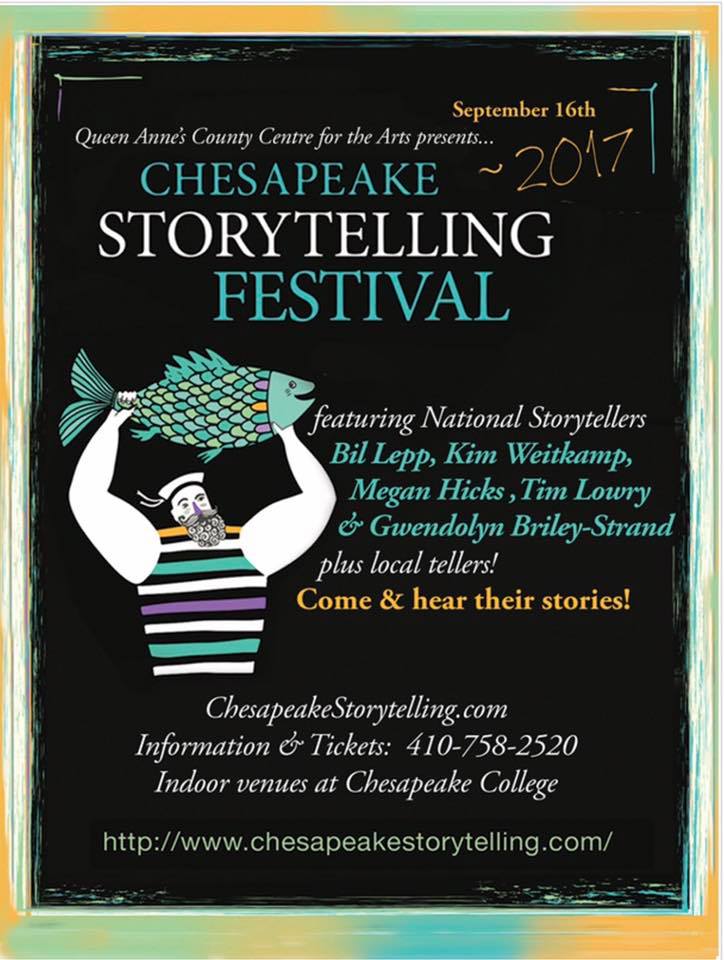