From 4- 8 pm, on Sunday, December 10, Harris Crab House and Harris Seafood Company are celebrating the 70th Anniversary of W. H. Harris Seafood with a great seafood buffet, along with a presentation of Memories, Stories, and Photos! Reservations Recommended. $35 per person/$70 per couple Call 410-827-9501 to reserve your seats!

Captain Billy Harris’ son Jerry joined the family business, W.H. Harris Seafood, in 1964, but when his dad “wouldn’t pay me enough. I quit him and went back on the water.” Jerry came back a couple years later under a renegotiated financial understanding. Daughter Karen Harris Oertel and her husband Art, the family historian, came aboard in the early 1970s. 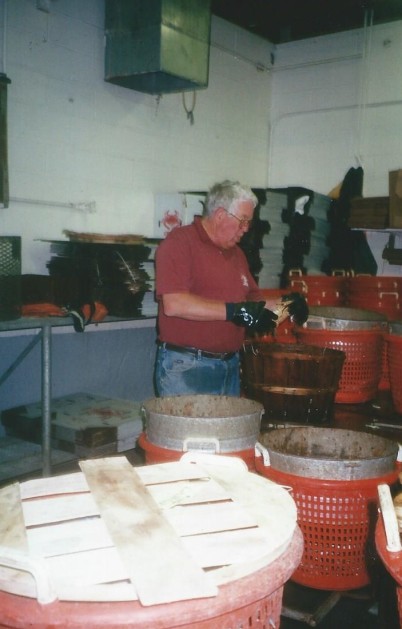 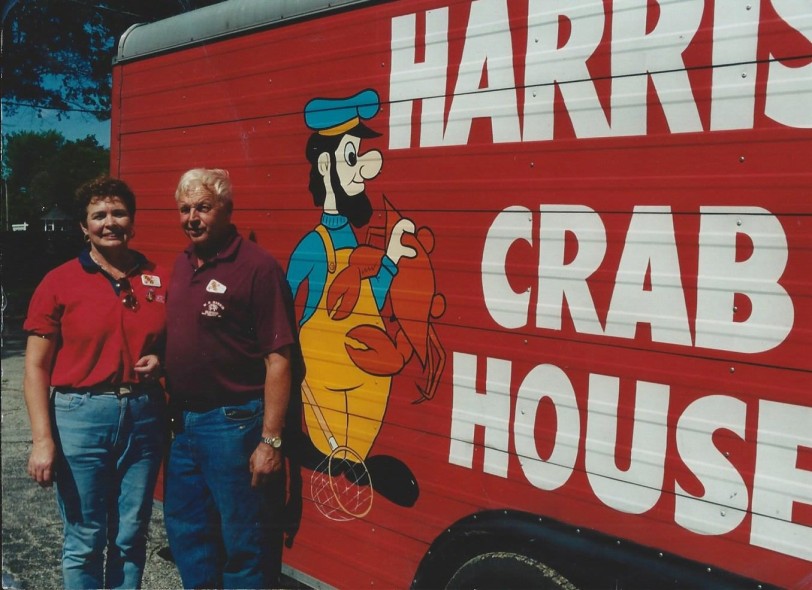 Both Harris offspring came up knowing what it meant to depend on the Chesapeake Bay for one’s livelihood.

In a recent conversation, Jerry Harris told me, “I started working with my father. Dad used to crab pot when he first came out of the service and had bought the store down Chester (on Kent Island). When I was little in the summertime, I’d sit on the engine house and separate crabs for him. I was about 10 years old.”

When Jerry graduated high school, he went to work on the water full time.

“Dipping (crabs) was fun work. Hand tonging was fun when you got on oysters, my lord, it just seemed like you didn’t get tired.” 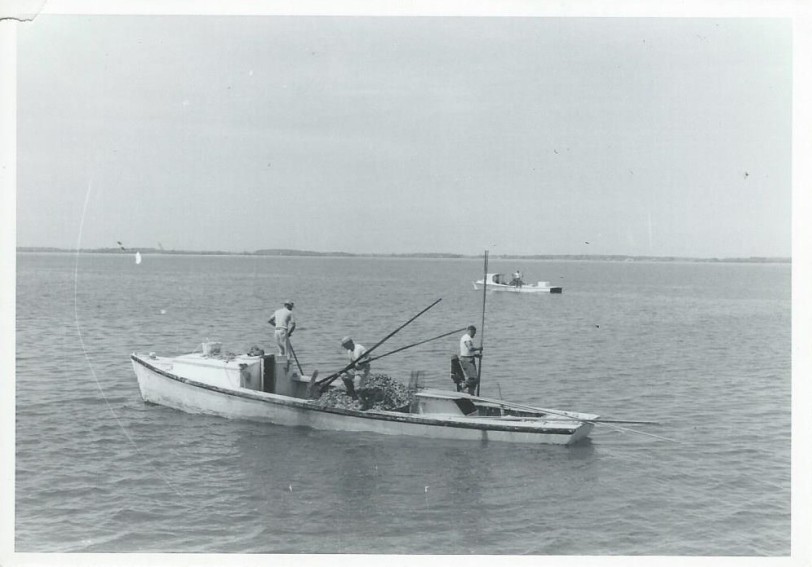 Jerry Started crab potting with the hardworking and savvy Kent Island waterman Billy Schulz. “One year,” Jerry says, “we’d been working up the up bay near Pooles Island and we came down to set in shallow waters (closer to home.) Billy said take ten pots off Kent Point (one of the relatively shallow bay’s deeper spots,). We used 70’ lines. When we went out next, we fished the shallow pots and then went out there out there to get those ten pots, and there were so many crabs you could hardly get them out of the water. They were actually hanging on the outside of the pots. We caught more crabs pulling those ten pots than we caught pulling the other 400. Amazing how many. They were hanging on the outside of the pots!

“We went back, fished the pots in shallow water, and then went back to those deep pots. We caught a hundred and some bushels. Billy was grabbing armfuls of females and twos by the armful and throwing them back over. It was something to see.

“I learned a lot. One year, Billy said, “We’re not going up bay.” I was like, uhmpf, we always did really well up there. He said, we’re not going. So everybody else took off and the crabs hit right here off Kent Shore.” Jerry shakes his head and chuckles. “Now you might say, how did he know that? Well, that’s the old waterman mentality. 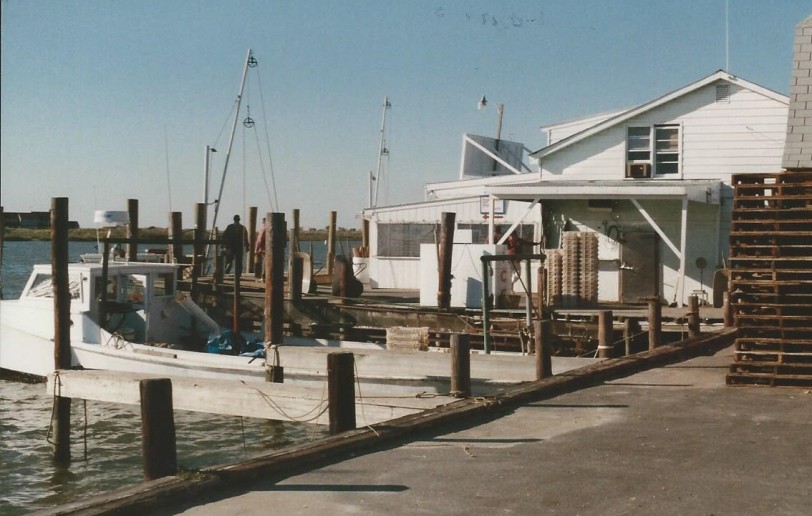 In 2005, Jerry and Karen’s dad told me, “Where my oyster house is now, I started picking crabs. I saw all those people coming down that marina (Mears Point) and I said, I’m going to try something. May not work, but I’m going to try it.”

Jerry remembers circumstances a little differently. “Funny part was,” he told me in 2017, “our dad was the type you had to put something in his mind. Let him come around to it.

“Where our original restaurant (ended up), dad had put a place out there to shed softcrabs on front of old oyster house. We weren’t really making much off it, and I said to him, this would make a nice little crab house.”

Either way, the Harris family opened their first restaurant. “So I built a place,” Capt. Billy said in 2005, “a restaurant right on the water, next to my oyster house, and man, those people…” He remembers his customers with a fond smile. “I used to serve crabs, steamed, soft crab sandwiches, and crabcake sandwiches. Everything originated around here. Man, people loved it. Every once in a while, we’d have a high tide, damned if they still wouldn’t wade around in there in their shoes.”

Karen confirmed her dad’s memories of the impromptu hurricane and high tide parties. “People would come in there,” she told me, “and we couldn’t get them to leave. They’d sit at those tables with their feet up on those high chairs. I remember one time I finally stopped taking people in, I said, no, I have to be concerned for our employees and our customers. The tide was really coming in. I was walking down between the tables and there’s a fish swimming along. I bent down and picked it up, and it’s flapping in my hand. I looked at the customers and said, “Well, this is as fresh as it gets.” 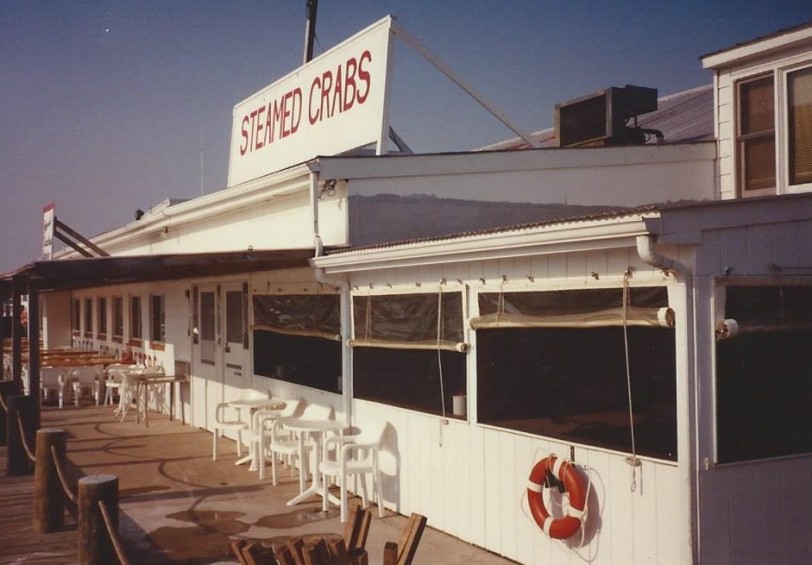 Even Capt. Billy was surprised by the restaurant‘s success. “The second summer it outgrew itself,” he said. By the late 1980s,“there wasn’t nothing else to do, only tear the old oyster house, the one that was my father’s, tear it down, and put up what you see today.”

“Most new restaurants fail in the first three years,” Karen told me. “In the old place, we didn’t know anything, but by the time we were ready to move into the new restaurant, we had those three years, plus another seven. We’d figured out what we were doing and decided it was time to move forward, take our opportunity.”

Or as Captain Billy Harris once told me, “When you think about doing something, if you don’t do it, you’ll never know.”

2 thoughts on “THE HARRIS FAMILY and CHESAPEAKE BAY SEAFOOD Part2”