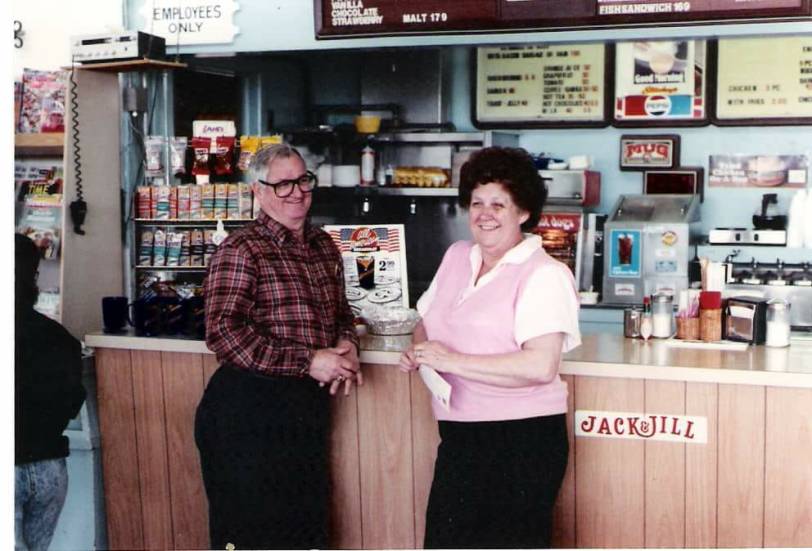 I recently had an opportunity to interview Margaret Montague and her daughter Patty Collier. Margaret, along with her husband Russell, managed the Grasonville, Maryland Stuckey’s from 1979 until it closed eleven years later.

Margaret and Russell grew up in Virginia. They met while she was still in high school. They were working together at a gas station when an opportunity came their way. Patty says three or four different sets of her aunts and uncles were working for Stuckey’s at the time, and word came down that a franchise owner named Groom was looking for help managing his store in Selinsgrove, Pennsylvania. Margaret says she told him, “If you treat me right and don’t holler at me we’ll get along fine, otherwise you can forget it.”

Mr. Groom must have not been a hollerer.

The Montagues and their four daughters managed that store for almost 20 years before a bypass was built nearby and the store closed down. 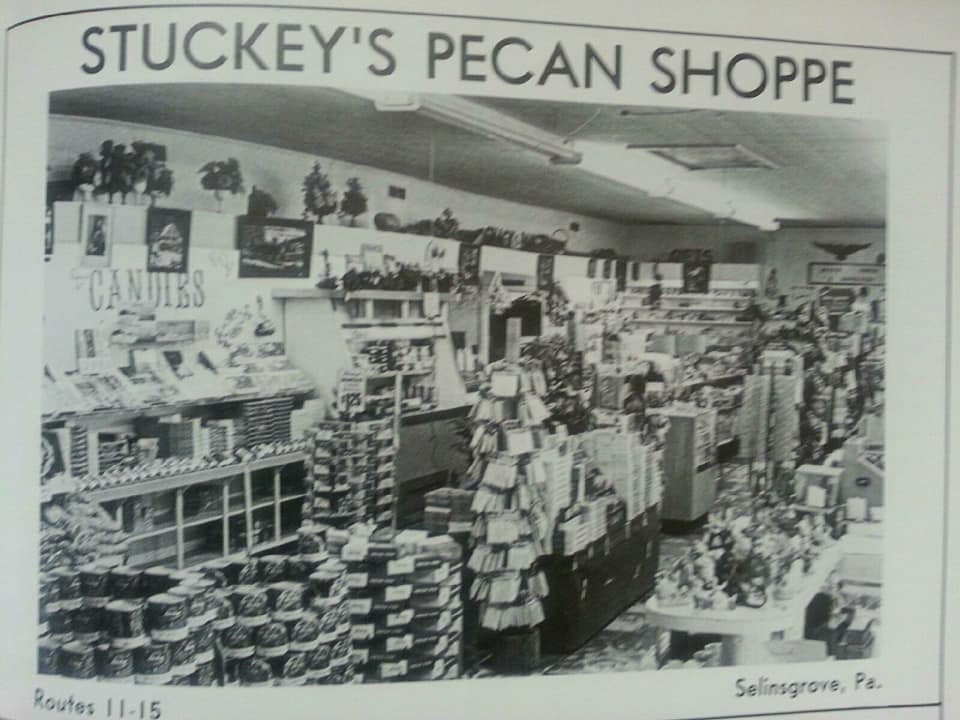 After four years of working other jobs, Margaret and Russell heard through some of their Stuckey’s relatives that owner Mary Esther Dyes was looking for management to replace her in-laws Leroy and Dorothy Dyes at her Grasonville store.

Calls and introductions were made, and a job offer followed. Margaret and Russell, along with their youngest daughter Patty, moved to Maryland’s Eastern Shore.

Like most Stuckey’s managers, and like Leroy and Dorothy before them, the Montagues lived in the manager’s apartment in back of the store. Margaret says the cost of living was low because they had no real bills. The most they had in expenses was replacing the food they ate at what was basically a 24/7 job.

Patty says the biggest changes between the stores in Selinsgrove and Grasonville were that the store in Grasonville served breakfast – Margaret says, “I bought many a case of eggs” – and in Pennsylvania they sold soda by the bottle while here they had to get used to serving fountain sodas.

There was a routine to life at Stuckey’s. In the morning starting coffee was the first order of business, followed by turning on the grills and fryers at the snack bar.  Bathrooms would be cleaned throughout the day, and end of the night cleanup was thorough.

Patty says the store’s biggest sellers were  collectible souvenirs like state spoons, plates and shot glasses, followed by the candy,  nuts, and fruitcakes.  “The good thing,” she says, is that “four out of five customers bought both.” 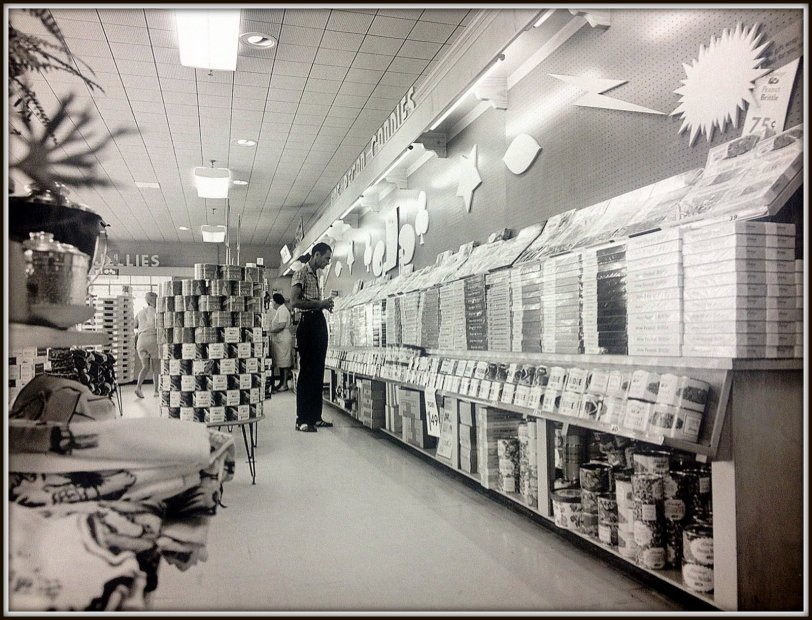 “Customers would come in to buy whole and halved pecans in a bag whole to bake with for the holidays, and they’d buy fruitcake for Christmas presents. People would knock on the front door of the store before it opened and after closing time just to get these items.

“People would send checks for candies and nuts and we’d package them up, take them to the post office and mail them off.”

Stuckey’s also sold a lot of gasoline. Patty says, “The gas war was going on. People could only buy gas up to $5.00, and the line would go out to the highway. It was unbelievable. Dad had to stop at a certain point because Stuckey’s rule was the attendant had to ask every driver if they wanted their windows washed and oil checked.”

Margaret says, “One guy came in and said, “Ma’am, I don’t have any money for gasoline, will you take a tire?” I said, hell yeah, I’ll take a tire. Russell said did you even check to see if it fit our car? I said no, all I can tell you is we’ve got us a new tire.”

On the other end of the customer spectrum, celebrities would stop in sometimes. Pat Boone once sat and hummed and sang with his friends at a table but denied his identity the whole time he was there. A few weeks later an autographed picture arrived in the mail, thanking the Montagues for their hospitality.

In 1981, Russell arranged for the Grasonville Stuckey’s to take over from Mrs. B’s Truck Stop on Rt. 50 in Queenstown as a station for the Trailways bus line. 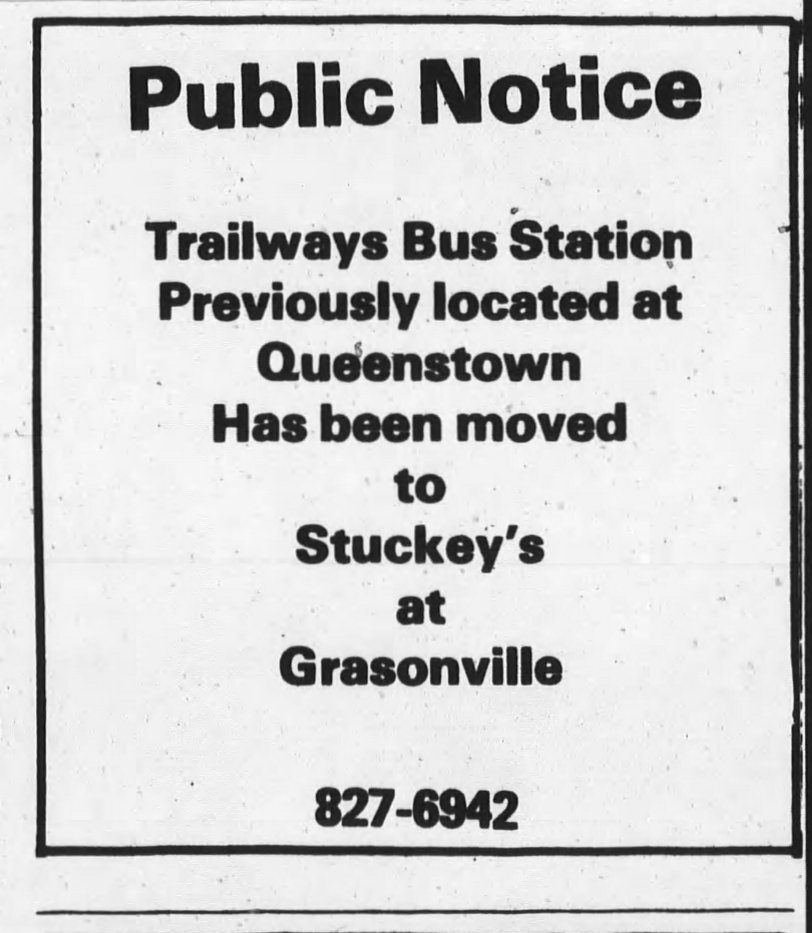 “Those were long hours,” says Patty. “We started at 7 a.m. Buses were supposed to end at 7 p.m., but if they were late we’d stay open until they got there.”

Among other destinations, buses would run from Grasonville to Baltimore, Washington, DC, and Ocean City. A ticket to Ocean City cost $10.00. Margaret says the bus drivers would ask her if she’d ever been to Ocean City.  “I told them I’d been once and didn’t ever want to go back again. Too many people. And they wouldn’t say excuse me when they bumped into you.”

Charter bus companies were particularly good customers. Russell made sure the bus drivers all got a free meal and one of the big pecan logs. He looked out for them and they’d come back time and time again.

The Montagues kept many of their friendships with the drivers after they retired.

Margaret was also fond of her boss, who passed away in August, 2004 at the age of 83. “I really liked Mary Esther,” Margaret says. “People warned me – she’s rough, they’d say. I said she’s not too rough for me.

“She brought her little dog in there all the time. Once this man said, “Lady, don’t you know you can’t have a dog in here?” and she said, “Let me tell you something, this dog owns this place, and if you don’t like it, don’t let the door hit you on the way out.”

Every Christmas the family would go down to Mary Esther’s home on the Chesapeake Bay to get their bonus.

The July 17, 1990 issue of The Star Democrat reported that the Grasonville Stuckey’s had closed. Serving their last meal, a hot dog, Mary Ester Dyes told the newspaper that after 36 years she “just decided it was time to quit.”

The Montagues are sure the removal of the blinking traffic light and closing of the crossover at the nearest intersection, creating a one way traffic pattern, was the impetus for the store’s closure.

A small classified ad in the newspaper’s YARD SALE listings might have been our Stuckey’s last public order of business. 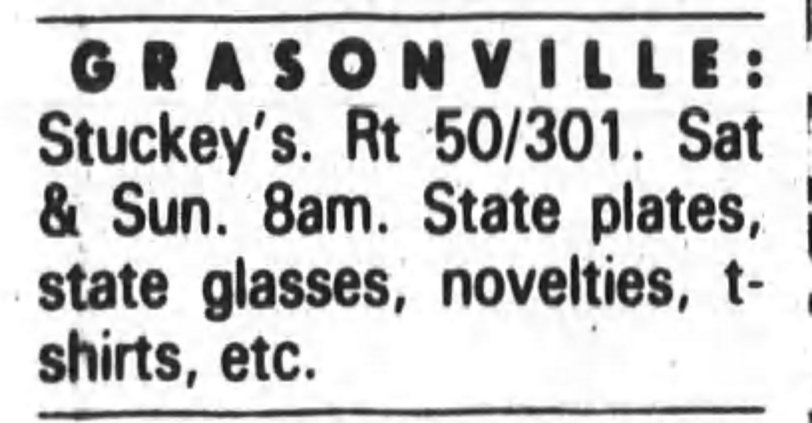 Before the summer was out, the new owner had demolished the landmark roadside attraction and begun construction on a new car wash and gas station.

The Montagues moved back to Virginia.

Margaret says, “I loved working at Stuckey’s.I had a job and I really truly appreciated it. Russell had an official red jacket with the Stuckey’s logo written in gold lettering. He said, “I feel like an idiot in this thing.” I said wear it and be proud.”

“I was Stuckey’s full burn. Still am.” 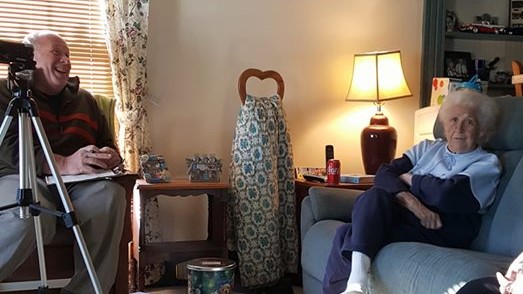 Russell Montague passed away in 2010. 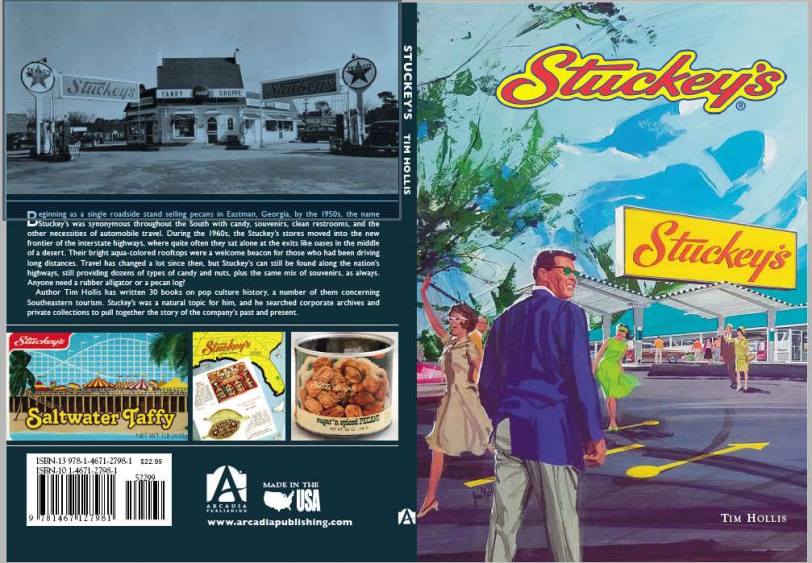 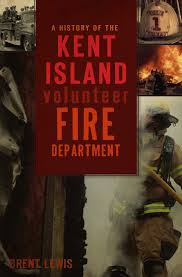 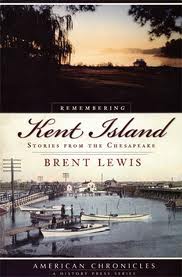 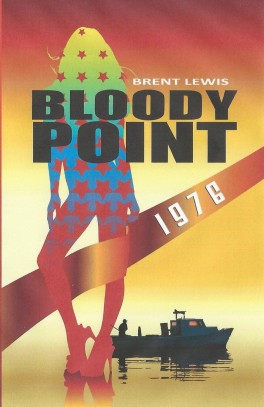