Beholding your first oyster, it’s hard to imagine who might have been courageous enough to pioneer their consumption. The packaging ain’t all that appealing. In its unexposed state, this vulnerable bivalve is protected by a shell masquerading as an impenetrable rock. What inside could possibly be worth the effort of denuding? 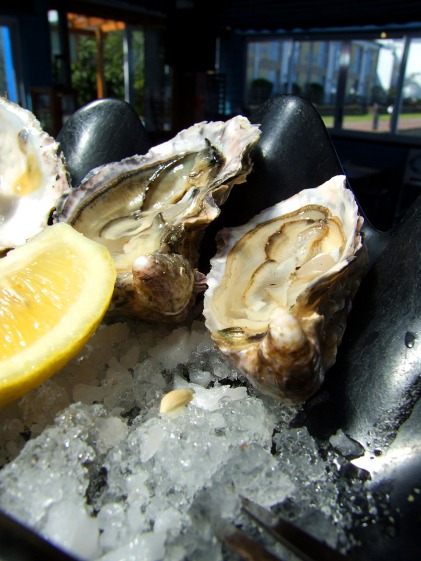 The oyster itself is a soft alien being. A throwback to prehistory. A creature that inspires squeals of disgust and unfriendly comparisons from the uninitiated. But to those of us in the know, the oyster is one of the planet’s great culinary delights.

The beauty of the oyster is truly in the eye of the beholder.

Historically, human beings have been gobbling up this magnificent mollusk even long before the ancient Romans began shipping oysters overland from the British Isles in carts filled with ice, and selling them for their weight in gold. Nomadic American Indians ate oysters by the ton, leaving behind mounds of discarded shells. Early colonists were sometimes sustained by oysters and other seafood over those first harsh New World winters. As the United States expanded, oysters were often shipped west by stagecoach.

Oysters are good for you. They’re low in fat and contain high levels of zinc, protein, iodine, and iron. Vitamins A,B,C, and D are also present.

Food this healthy gets the blood flowing, so…

The oyster’s reputation as an aphrodisiac ranks right up there with champagne, chocolate, and expensive gifts. The passion-arousing potential of oysters has been celebrated for thousands of years. Aphrodite, the Greek goddess of love herself, rose from the sea on an oyster shell and presented her ally Eros to the ancient world. Casanova swore by oysters and is said to have eaten fifty every morning while bathing with whichever paramour was currently in favor. 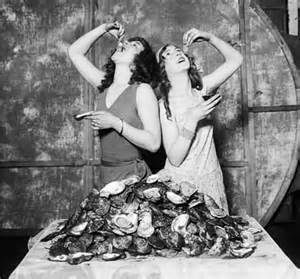 For a hundred years or more, the Chesapeake Bay’s Eastern Shore was the oyster capital of the world.

Around the beginning of the 20th century, Charles Nash and his son moved their Kent Island seafood packing house to the northeastern Kent Narrows peninsula, where Pete Baxter had also started an oyster shucking business. Eventually there would be up to 14 packing houses, usually owned by entrepreneurial watermen, on that side of Kent Narrows and the area grew into one of the Eastern Shore’s economic hubs.

Kent Island icon Melvin Clark (1922-2008) once told me, “Back in the old days you were either a waterman or a farmer. There was an abundance of oysters but no money. We’d sell to the shucking houses and sometimes you’d sell two bushels for a quarter just to get rid of them.

“Contractors across the bridge liked to hire Eastern Shoremen because they knew they would work hard. Only problem was they knew they’d loose them in September come oyster season. Oystering got into your blood. You were independent. You could go out when you wanted and come in when you wanted. Nobody could tell you to do anything.” 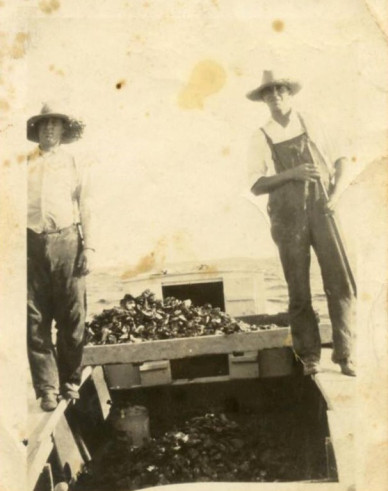 Oystermen started young and were expected to work like grown men. The well-known Fisherman’s Inn restaurateur  Sonny Schulz tells a story to illustrate:  “I fell overboard once when I was about fifteen years old. I was working down Eastern Bay with Teeny (Jones) and Robert (Horney). It was cold and there was ice all around. I was up on the bow washing the boat and getting ready to go home. That (cleaning) water froze and I slipped. It’s a damn good thing I came up next to the boat because those two were laughing so hard they wouldn’t even help me. We had a few oysters, and the boat was low, so I was able to climb back in. I went in the cabin, there was this little old stove, and everything I had was wet – long drawers, boots, two or three pair of socks, two pairs of pants, and I didn’t know it until I got home, but backing up so close to that little cabin stove, I ‘d burned my tail.

“Teeny had an old WW1 overcoat and that’s what I wore while we unloaded. He wouldn’t let me go home until we’d unloaded.”

And it was never an easy life.  Lifelong waterman Warren Butler: “One time I was oystering next to Teeny Jones down at Crab Alley. It was a couple days before Christmas and it was so cold icicles were hanging from the culling board to the water. Teeny said, “Hey, Warren, let’s go home. What difference does it make whether we starve to death or freeze to death? At least if we starve it’ll take a little longer, if we stay out here we won’t make it through the day!” 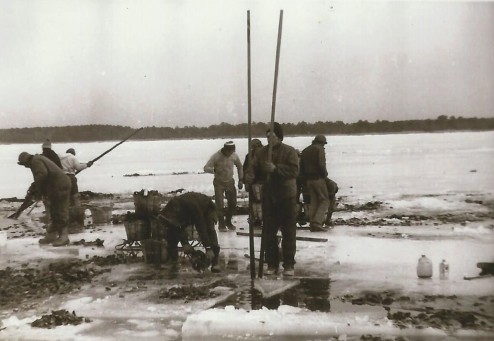 Kent Island’s Weldon (Guinea) Legg, (1937-2014) with a depth of traditional Chesapeake Bay folk knowledge, once told me in an interview, “Electronics changed the business. With depth finders, GPS, watermen don’t have to learn everything. I tell my grandchildren, you can’t be an oysterman until you learn the water out there like the palm of your hand. You’ve got to know where you are in daylight; you’ve got to know in the dark. You’ve got to know.”

“Most fellows who make (oyster) tongs today make them like real tongs but don’t build them to suit, what a pair of tongs is really supposed to be. Some of them are beautiful. Carry them out there and they couldn’t scratch my butt. It’s not about how they look. You have to know what to look for. Have to make sure the bottom of your tongs is made from the butt of the tree. You don’t want them upside down. Have to know your grains. Some of that wood is like a sponge as soon as they hit the water. You could work the tops and the bottoms wouldn’t really move.”

Seafood entrepreneurial trailblazer and founder of Harris Seafood and Harris Crab House and Seafood Restaurant Billy Harris (1922-2006) once told me, “When I was a boy, oysters were 25 cents a bushel. Three men in a boat could catch 75 to 100 bushels a day. November 1 was the start of dredging season. There’d be 100 dredge boats off Love Point catching 300 to 500 bushels a day. Back in my grandfather’s time, in the 1800s, they said if you caught four bushels that was a good day’s work. There were 15 oyster houses at Kent Narrows. When I started, a gallon of oysters was $2.50. My father had sold that gallon for 59 cents.” 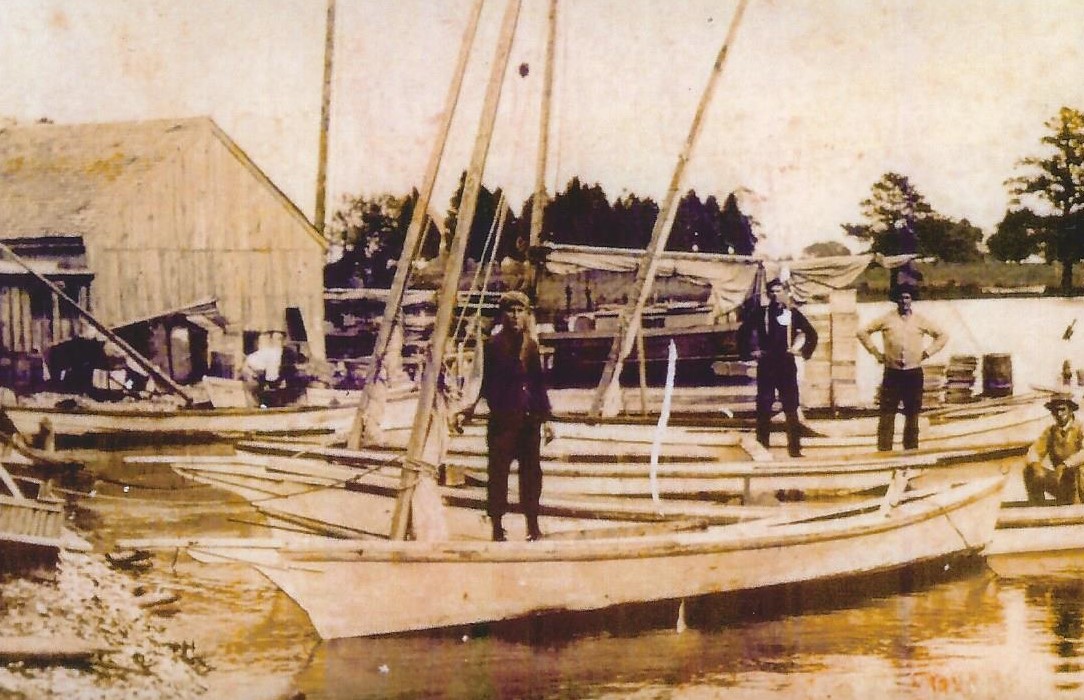 Gordon Crouch, another native Islander with a deep roots and insight into the Eastern Shore’s past once told me, “The packing house (at Little Creek) was in our family from 1929 until I retired and sold it around 1990. My grandfather ran the packing house; my father had a store and bar down there. We mainly catered to watermen, sold beer, lunch meat, and some groceries. I started working there when I was about 12 years old.  Daddy used to have a truck that would come up from St. Michael’s with oysters. We’d be up before school shoveling those oysters. Back then, you could run the whole operation on $200 or $300 per week. Everything – buying oysters, paying shuckers, and we had a houseful of shuckers. After I got out of the service I went to work for the state. I was working part-time for my father but that arrangement didn’t last long. He couldn’t get help. He just handed me the keys. My state job lasted nine months. I ran the packing house for about 29 years.

“Back then a lot of oystermen didn’t do anything all summer. They’d hang their tongs up and be done until fall. In the old days I heard of men who quit oystering with $25 and lived on it all summer. Of course, back then everybody had hogs, chicken and eggs, a garden. About all you’d need would be a barrel of flour.

“At one time the oyster business used to be big on Kent Island. Right here in Little Creek there were six packing houses. There were two or three more up the creek. Started dropping off in the 1970’s, after Hurricane Agnes or one of those big storms. We were the last ones to close. It was the end of an era.”

Capt. Guinea Legg  once told me that, “If I had to do it all over again I’d rather oyster with hand tongs than anything,” and I believe he spoke for generations of watermen who came before and after.

“Oystering gets in your blood.”

That’s what those Eastern Shoremen once told me. 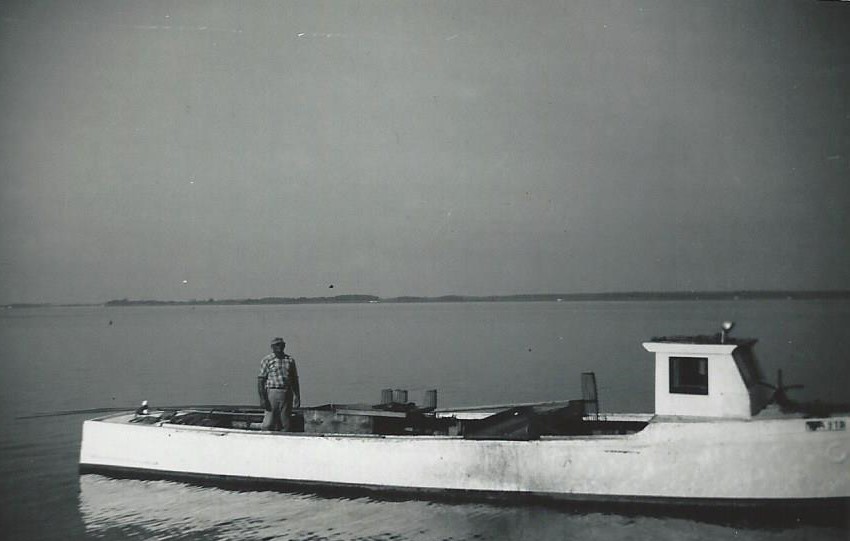 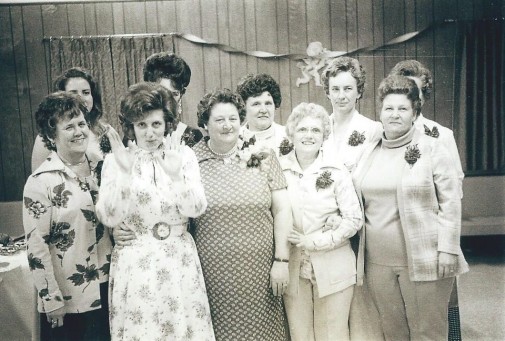 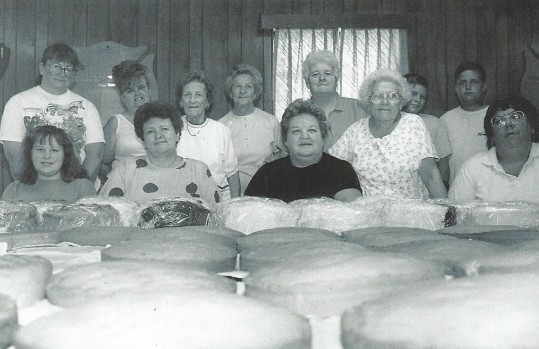 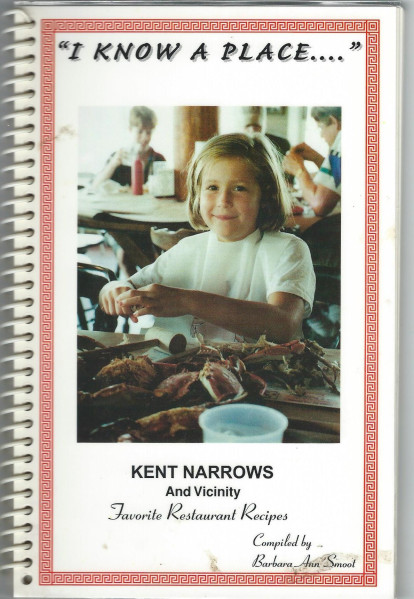 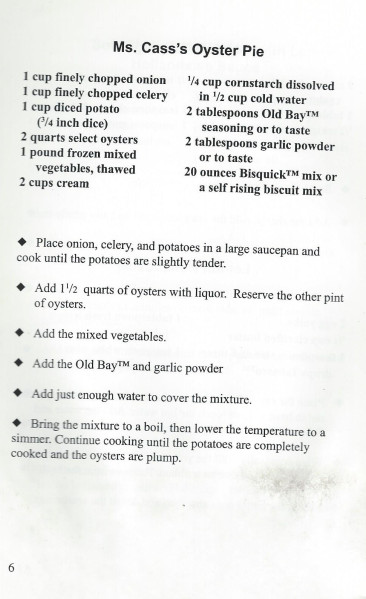 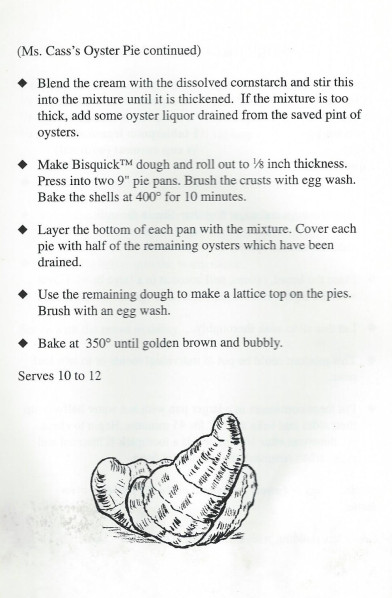 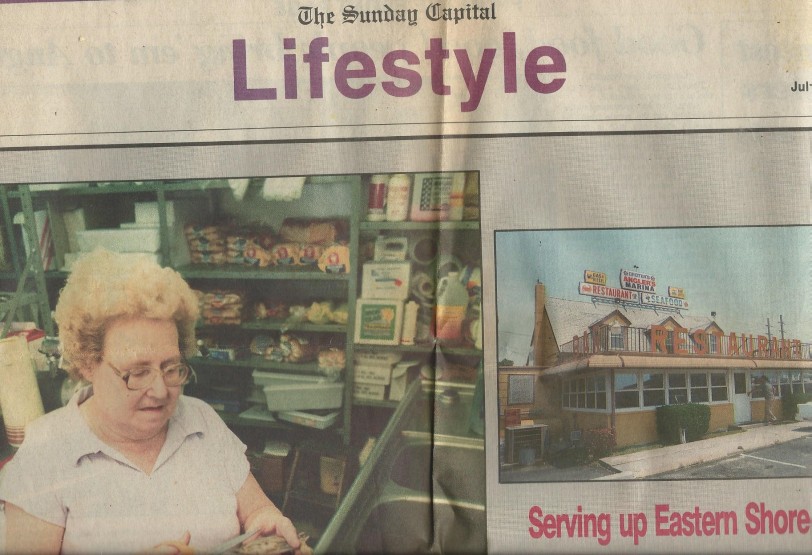 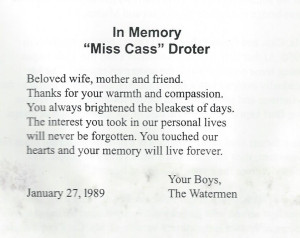 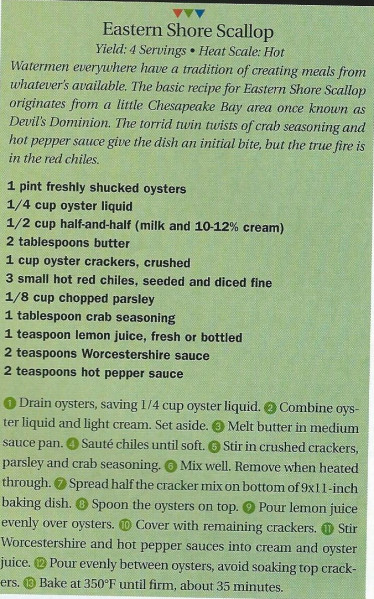 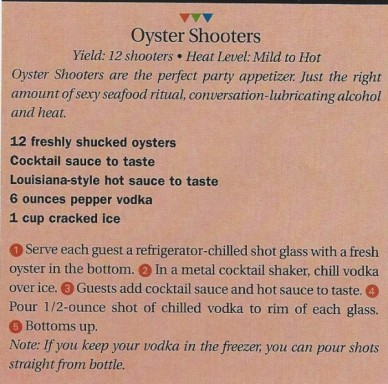 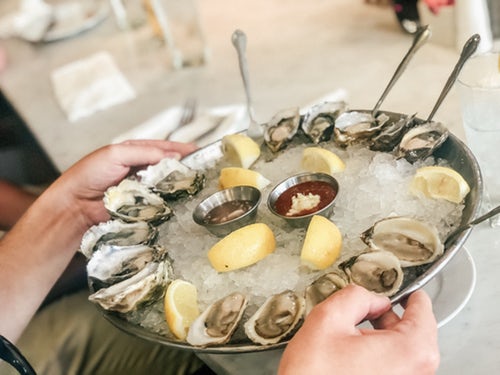 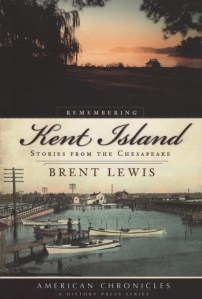 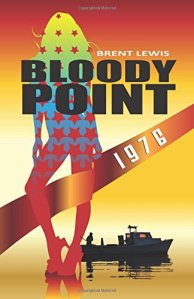 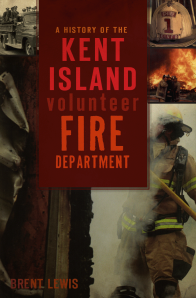