We rented cellular phones in Ireland.

It was late at night in our B&B and my phone was ringing off its nonexistent hook. 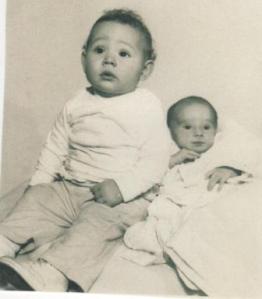 In the morning, out hostess Rachel cooked us all a traditional Irish breakfast. Fried eggs, baked beans, and meat. Toast. Serious black coffee. Tea so dark and intense you’d think it was coffee, too. We met some folks from Colorado who were also driving around Ireland with friends. They’d been where we were going and gave recommendations.

Turns out, Rachel’s a distant cousin. She claims DeCoursey ancestry on her father‘s side, and said “they used to own everything around here” with a tone that indicated like us she too wonders where all the riches went.

Rachel was the only person we ran across who showed any enthusiasm about my forebears. Other reactions ranged from barely concealed contempt to blatant contempt.

Seems these DeCoursey folk weren’t all that Irish. About a millennium ago, they were amongst the island’s Norman invaders who conquered the natives and ran the place for a century or two. The Barons of Kinsale. Since the Irish seem to understand the concept of holding a grudge, we soon stop mentioning my ancestry. 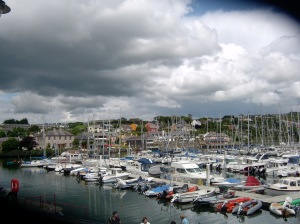 Strolling around Kinsale, Ireland’s gourmet capital, there’s a distinct Mediterranean vibe. The sea hangs heavy in the air. Food is cooking everywhere. Enticing whiffs of culinary this and that waft through the air. If you squint you can see cartoon squiggles. The buildings are two and three story boxes with dormers, archways, and lots of ornate trim. There’s vibrant color on every block, but a predominance of coral and something very close to crab bisque. The people are very dark or very blonde. Dogs with collars and tags trot through town unencumbered by any master. 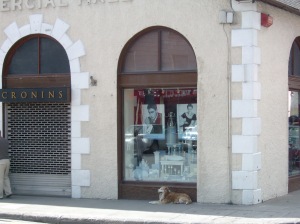 A batch of low black clouds blew in from the northwest. As the rain started to fall, slow at first and then with more insistence, we ducked into a bistro called Vista where we were graced with an upstairs harbor view of the squall. There was red pepper soup, Balmer’s Cider, and caramel cake. Some of the best seafood chowder ever ladled up. The sun came out just as we were handed our check. Standing guard at the bottom of the stairs was a life-sized concrete gargoyle bust, half-dog, half man-bat, all badass. Lorraine sat with him and almost got him to smile. 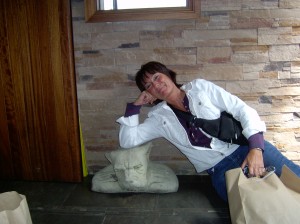 We drove southwest out of Kinsale. Despite our growing reluctance to mention my genealogy to the locals, there was a connection I still wanted to make.