DeCoursey Country is a fifteen mile loop we picked up off Rural Road 600. At the junction there’s a rustic general store and a sign that shows the area’s designated route and scenic landmarks. Cole and I posed for pictures. Everybody took turns deciding they needed provisions, so everybody took turns going into the store. A handful of locals were milling about outside. The wee grey lady working the register must have been on duty since the DeCourseys left for the New World.

I pointed Greg south to Old Head of Kinsale. The ruins there didn’t appear to have as strong a family connection as some of the others on the map, but I wasn’t looking for anything specific as much as a sense of something. Something bigger. 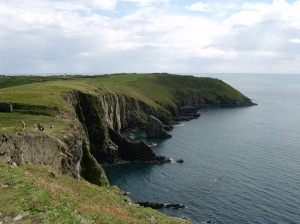 The road’s narrow, potted, and on a keep-your-self-together downgrade. Nobody in the opposite lane either slows down or worries about any perceived ‘center’. There were several close calls, but each thin slice of alarm was followed by a teasing taste of some delicious scenery – glimpses at first, a quaint nearby cove or the mouth of Kinsale Harbor in the distance. By the time we arrived at the majestic cliff side walk near the entrance to Old Head’s exclusive golf course, the view was full-on food for the soul.

It’s an ancient place. There’s something mystical there. The meadows blend into the skies into the seas with dizzying beauty. Hundreds of feet of steep jagged rock face are the only earthly feature that provides any definition to this edge of the world.

Sirens of legend call up to you, urging you closer, farther down the precipice. The bigger the risks, the bigger the sensory reward.

Fishing dead tourists out of the drink keeps the Irish Coast Guard busy.

As a whole, our group wasn’t adventurous, and though we didn’t have much of an envelope, Nicole and Greg pushed it. She was displaying her typical mountain goat tendencies. Physical recklessness is out of character for him. He was having an epiphany.

And his epiphanies are his business.

More experienced world travelers might scoff at how easily impressed we were by Old Head of Kinsale. They might point out, say, the Cliffs of Mohr, Ireland’s number one tourist attraction, and scoff some more, like, “You didn’t see the Cliffs of Mohr?!? Old Head is no Cliffs of Mohr.” Well, Mohr fell off our itinerary in the early planning stages.

Some things slow, not everything fast.

Besides, these cliffs were mohr than anything we flatlanders had ever seen before.

The ruins uphill were my connection to the DeCourseys. Overlooking the stunning panorama below, there’s this shell of a time-battered slate hulk, maybe four stories high. Exterior walls alone have stood the test of time, but that’s all I needed. My ancestors may never have stepped foot across this particular threshold, but this was DeCoursey Country. The country of my mom’s family, and therefore somehow mine, too.

I grabbed a shallow handful of stones from inside the ruin’s base.

When we return to Ireland, we’ll stay in Kinsale longer. Explore the legacy. For now I had what I was looking for.

Nicole wondered aloud why we, the ancestral family, ever left.

Peg said she was pretty sure they ran us out.

There was a rumbling in the northern sky. We walked around wide-eyed as long as we could. Just about the time we got back to that country store crossroads, a biblical hail storm exploded. It was nighttime dark. Irish nighttime, that is. Daylight punches out around ten thirty p.m. on the Emerald Isle. 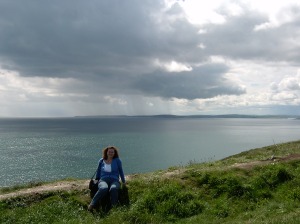 In Ireland, I never did see it get Eastern Shore dark.