THINGS I LEARNED IN IRELAND

The Irish are opinionated and nosy, but in a good way.

Guinness is way better the closer you get to its birthplace.

There are a lot of places, people, and things that call themselves Ireland’s most popular tourist attraction.

If you lived in Ireland 500 to 1,000 years ago, and could possibly arrange it, being born to nobility was definitely the way to go.

The city of Kinsale, Ireland’s gourmet capital, reminds us of Annapolis. The harbor, banked by wandering medieval streets lined with trendy restaurants, pubs, and shops, is full of boats moored to floating docks. The sea hangs heavy in the air. Food is cooking everywhere. Enticing whiffs of culinary this and that waft through the air. If you squint you can see cartoon squiggles. 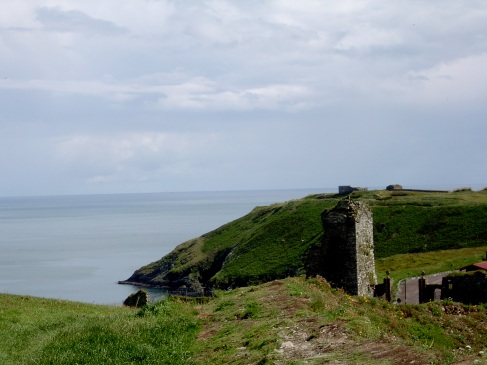 Old Head of Kinsale is an ancient place. There’s something mystical there. The meadows blend into the skies into the seas with dizzying beauty. Hundreds of feet of steep jagged rock face are the only earthly feature that provides any definition to this edge of the world. Sirens of legend call up to you, urging you closer, farther down the precipice. The bigger the risks, the bigger the sensory reward. Fishing dead tourists out of the drink keeps the Irish Coast Guard busy.

About five hundred years ago, Cormac McCarthy, King of Munster, built the third Blarney Castle, now a famous landmark which draws something like a quarter million visitors per year, most who come to put great trust in a burley Irishman who will hold their waist as they lean way back, almost a hundred feet in the air, and plant their lips on a stone of humble dimensions but mythical status.

If you can picture Blarney Castle as the setting for the type of fanciful adventures that involved great warriors, mysterious magicians, and what the hell, dragons, then Rock Close is the fairytale forest of druids, witches, and Little Red Riding Hoods. Simple dirt paths crisscross throughout this enchanted forest of thousand year old yew trees, running streams, and curious rock formations with names like the Fairy Glade, Witch’s Kitchen, and Sacrificial Alter. I was pretty sure I caught a troll peeking out from under a footbridge. Any visitor who would decide to skip Rock Close renders their stop in Blarney incomplete.

Waterford’s an old Viking port, the country’s oldest city, founded in 914. The British grabbed Ireland here in 1170 and never really let go.   Glass-blowing is an Irish tradition. The Waterford Glass House was founded in 1783 by two Quaker brothers, George and William Penrose. Current annual sales are estimated to be between seven hundred fifty and nine hundred million. Dinnerware, vases, clocks, and candlesticks are just some of the everyday household items the craftspeople of Waterford Crystal elevate to objets d’art. They’ve also created exquisite one of a kind pieces for popes, presidents, and sports champions. The most famous among their unique works is probably the Times Square Millennium New Year’s Eve Ball. This iconic masterpiece weighs a little over a thousand pounds and is six feet in diameter. It’s covered with five hundred and four crystal triangles that sparkle like time passing before your eyes.

Kilkenny is a historic medieval county seat about thirty miles north of Waterford.  Famous for its rare black variety, Kilkenny’s known as the ‘Marble City’. The cobbled streets are tight and busy. They’re lined with brightly colored storefronts and well-known pubs. Outside St. Canice’s Cathedral, there’s a limestone round tower, about 98 feet high. It’s the oldest structure in Kilkenny. St. Canice’s sits on land that’s been the site of Christian worship since the sixth century. The cathedral was built in the 1200’s and is still in use today.

Food and spirits have been served up at Kilkenny’s Kyteler’s Inn for over 650 years. Alice Kyteler was born in 1280. Her widowed daddy died when she was eighteen, leaving her a small fortune. Young, pretty, and rich, she opened her soon to be infamous inn. She married and outlived three wealthy and well-connected men. Her inn stayed busy as hell with a reputation as a place with a lot to offer that wasn‘t on the menu. Dame Alice always kept a bevy of Ireland’s loveliest (and friendliest) tavern girls on the payroll. Some people said Alice was running a whorehouse. Others called it a coven.

In 1320 she married Arnold LePoer. Within months, Arnold was feeling Le Poer-ly. Before his death, LePoer confessed knowledge of his wife’s involvement in murder, magic, and devil worship. His children, and the children of her first three husbands, came forward with charges that Alice had hexed and poisoned their deceased loved ones. Put spells on them. Used her evil powers to assure she was each man’s sole heir. Fornicated with an incubus. Dame Alice, along with several of her employees, was found guilty and sentenced to be burned at the stake. The night before her sentence was to be carried out, however, she escaped. Here they remember, though. Here they still call her The Sorceress of Kilkenny.

Dublin’s the capital of the republic. Ireland might be a country of photogenic villages, epic seascapes, and rolling pastures, but the heart of the nation’s citizenry, history, government, commerce, culture, and education beats in Dublin. In size and population, Dublin’s bigger than Detroit and smaller than Dallas. The residents are multi-cultural and youthful. The average Dubliner’s twenty six to thirty four years old and single. He or she might be Irish, but they might also be Eastern European, Russian, Chinese, Nigerian, Filipino, or Brazilian. After decades of unending emigration, Ireland’s recent prosperity has attracted workers from around the world. For about the last two thousand years, all the good and all the bad that can happen to a people have happened here. The history of this city fills libraries. Dublin was the base of Ireland’s English rule for most of a millennium. Since 1921, the twenty-six southern counties have governed themselves from here, while six northern counties are still under English jurisdiction. Irish politics are among the knottiest. Dublin has long been a hotbed of passionate artistic creativity. Dublin smells old and wet, kind of like New Orleans, but with less pee.

It’s true that Ireland can render newcomers harmless by turning them Irish. Usually in the five minutes it takes to pour a good pint.

When you’re in Great Britain and Tony Blair steps down as Prime Minister, you expect it to dominate news coverage. Paris Hilton getting out of jail? Not so much.  In Ireland or Italy, Tunisia or Tijuana, our culture precedes us. Think about it.

To have friends you can spend long hours with in a confined and foreign space and not have it result in the dissolution of the friendship is a blessing. 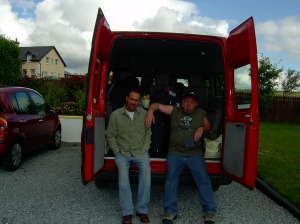 No matter where she goes, my daughter is a bright and brave soul with nerve, a sense of humor, and an intellectual curiosity about the world. Though she’s got a lot of places to go to before she’s been where I’ve been, she’s already a better traveler than I am. She’s inspiring. 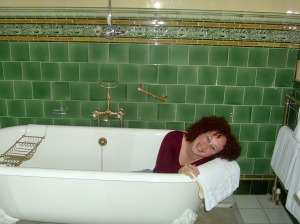 No matter where we are my wife is a gift. We enjoy each other’s company at home and away. She understands me better than anyone in my life ever has, and we both know she’s a step ahead of me at all times. She thinks I’m both brilliant and dim-witted. She’s beautiful. She’s smart. She’s funny. Anything we see in this world is better when we’re seeing it together.

Ireland was a special place and time in our lives. My wish is to experience each day with the spirit and joy of a lighthearted traveler. May the saddest day of your future be no worse than the happiest day of your past.

7 thoughts on “THINGS I LEARNED IN IRELAND”