“I remember,” Jack Coursey says with a chuckle, “when there were a dozen oyster houses at Kent Narrows and one restaurant. Now there are about a dozen restaurants and one oyster house.” 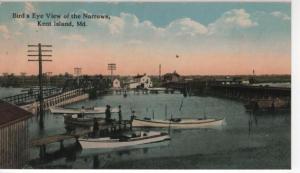 “My father was what today would be called an entrepreneur,” Jack Coursey smiles. “He was always looking to get into things, so he built an oyster house down on Kent Narrows, on the same property that became the Harris family’s seafood operation.

“After my father sold that first oyster house, to Kent Islander Holton Harris, he bought a piece of property on Kent Narrows South on what I’ve called Well Cove all my life. Now I see signs there call it Wells Cove, but I’d always heard they called it Well Cove because there was an old well there and the watermen who walked a mile or more to get to their boats would fill their water jugs there instead of lugging them from Grasonville. I’ve done some deed research in recent years, and some of the old documents use Well Cove and some use Wells Cove. I’ll call it Well Cove until I die.

“Daddy never really ran that oyster house on a day to day basis, so he sold to Ralph ‘Skeeter’ Thomas and his wife Katie. They were the first to run a restaurant and bar business there.

“By the end of the 1930s, there must have been a dozen or so oyster houses at Kent Narrows. The first one where daddy built, on the north side, there was five or six others. It wasn’t always the case, but the impression was that Kent Islanders – Carroll Baxter, the Nash brothers, John R. Coursey – mostly owned the oyster houses on the north side, while people from Grasonville were on the south.

“All the oyster houses were on the Eastern side of Kent Narrows, none on the Kent Island side, over there was just marsh.

“The oyster houses dominated the local seafood market, though there was a good bit of crab picking. With the advent of clamming after World War II, after Fletcher Hanks invented the hydraulic clam rig, what we called mannose, soft shell clams, became more popular. Before that, all we did with mannose, you turned your boat against the shore and blew the clams up to use for eel bait. Nobody really ate eel, but used them as trot line bait to catch crabs. 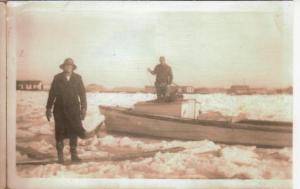 “There wasn’t much commercial fishing. It was mostly crabbing and oystering. There were some seine haulers in Queenstown and Rock Hall, a few fixed net fishermen. Those oystermen that didn’t want to go crabbing would find other things to do in summer. Most watermen had other skills like carpentry or painting. There were a number of canneries in operation around here then that could provide work. When oyster season came back in they’d leave good paying jobs to take a chance on oystering. My father used to tell a joke about the oysterman who quit a carpentry job to go oystering and paid somebody else to build him a culling board.

“Daddy subdivided that Well Cove property and sold the waterfront oyster house parcel to the Thomas’ for $250.00. Last time I checked the assessment for that property, the land value was around $400,000.

“Daddy eventually sold the other three or four Well Cove lots too, but kept the front piece. When I was growing up after Prohibition, Queen Anne’s County had one liquor store which was owned and operated by the county. That was in Centreville. I’m sure as time went on there was a clamoring to have something closer to the lower end of the county and Kent Narrows was probably a good market for alcohol. In the late 1940s the county got out of the liquor business and started issuing licenses. That’s when daddy built a little block building on the corner of the main road and rented it as a liquor store.

“With his 1938 run for sheriff, my father had gotten a taste of political success and in 1942 he ran for Register of Wills. Daddy had proved himself as sheriff – that position had given him access to people all over the county – and he was personable. He won three elections and served until 1954. He died in 1955. My mother passed away in 1983 at the age of 93.

“Neither of my parents were what you would call well-educated, my mother was the oldest in a household full of little Catholic children who needed to be taken care of, I’m not sure what daddy did as a child, I’m sure he didn’t go to school much, but they were voracious readers. We always got two daily Baltimore newspapers, they’d get the county paper, the papers from nearby counties, we had books in the house, not great libraries, but we had a set of encyclopedias. Some of this had to do with being in the store business, somebody would come along and we could buy books at a discount.

“We were encouraged to study, go to school, I was first to graduate from college. Education was important in my family.” 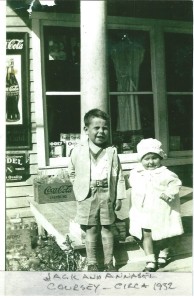 Jack and his sister Annabel Coursey c.1932 in front of their parents store in Grasonville.

The full profile can be read in the current issue of the Kent Island Heritage Society newsletter. Membership information available here: http://www.kentislandheritagesociety.org/