Reblogged from two years ago

After more than half a century, the multi-generational family business and regional culinary landmark served up their last piece of Eastern Shore fried chicken and their final chocolate milkshake this past Sunday.

Located in Grasonville along the Rt50/301 highway, about ten miles from the Chesapeake Bay Bridge, Holly’s Restaurant opened in 1955, three years after the bridge’s completion. For many of us around here, as well as for a multitude of folks who passed through over the decades, Holly’s has been a part of our whole lives. 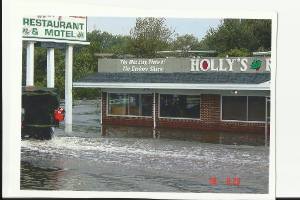 Holly’s is now one of those places.

One of those places that used to be, but isn’t any more.

2 thoughts on “SO, HOLLY’S CLOSED”