THE BAY TIMES has been The Voice of the People since 1963.

And it’s not the paper’s fault, but the people here have been off by about 3.8% ever since.

So it was probably a good thing when our local community college offered incoming students a “Psycho Adjustment.”

Our Eastern Shore was much more rural in the early days of The Bay Times, and though hunting and fishing are still two of our top recreational past-times, these days not every seasonal event has to be described with such a predatory vibe.

The Bay Times was never afraid to call out local lawbreakers, as they did when a well-known farmer who had “made a fortune” in real estate was charged with a rat infestation at one of his properties:

Though the paper was also always happy to honor and celebrate deserving members of our community, no matter their stature:

Sure, there was always advertising:

But what is a beloved local newspaper without some schizophrenic movie ads and some sexy headlines (intentional or otherwise),

plus a little crime: 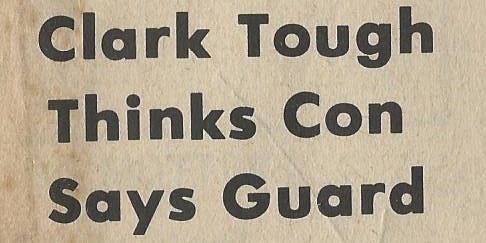 Or a story full of potential for somewhat-out-of-context future mocking, (1971)

The Bay Times of the 1960s and 1970s was a weekly publication its readers could count on for local news and such regular features as Miss Mamie’s Notebook (a social column reporting the comings and goings of local folks), Ralph Hoyt’s pre-Larry King-like pondering editorial column Baysically Speaking,  and County Comments, a blind-item feature using pseudonym and vaguely scandalous syntax designed to stir up  chatter and publicity.

And on occasion, they gave us a chuckle or two.