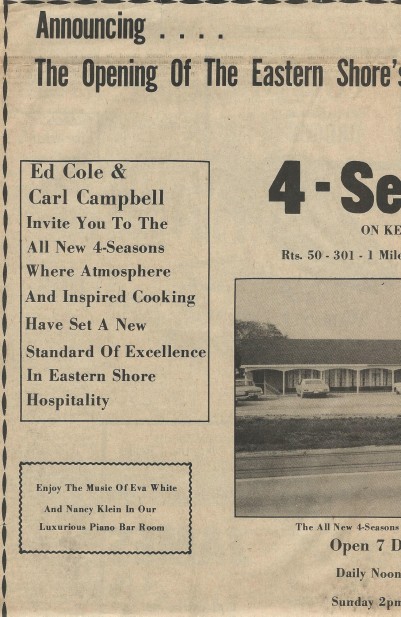 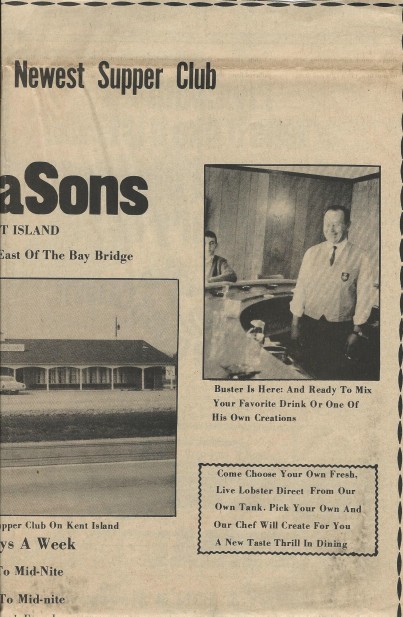 Taverns, or ordinaries, were one of the pillars of life in the colonial villages that dotted the Chesapeake Bay shoreline in the early days of our country. These establishments were woven into the very fabric of a community’s economic, political, and social activity. Typically situated at busy crossroads, ordinaries served both locals and travelers. The tavern owner also often functioned as postmaster, real estate agent, auctioneer, arbitrator, and referee.

The Maryland colony began licensing ordinaries in 1658, but there were any number of taverns and ordinaries operating around the Eastern Shore by this time. In fact, it’s likely the first tavern in what would become the state of Maryland was located in the long-gone bay-side village of Broad Creek on Kent Island, dating back to the 1630’s or 1640’s.

The Chesapeake region was known for its home-cooking and hospitality for generations, up to and through the Civil War Era. In the days of the grand bay resorts and in-town boarding houses, few guests ever complained about an Eastern Shore meal. After the Bay Bridge was completed in 1952, there was an explosion of roadside dining options available to the modern gourmand on the go.

In the 1960’s and 1970’s, the following were some of the local restaurants serving the Gateway to the Land of Pleasant Living:

The first stop after crossing the Bay Bridge would have been Pier#1 Marina & Restaurant, now and for many years known as Hemingway’s. 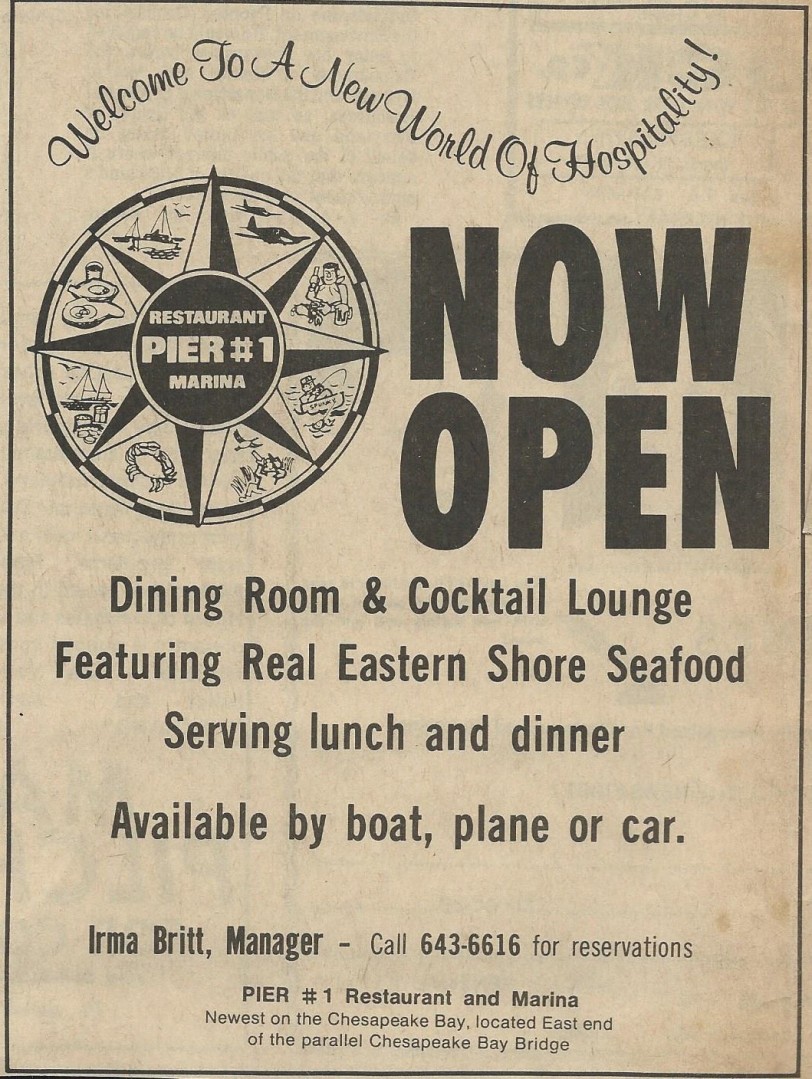 This Bay Times ad suggest the restaurant was newly opened in March, 1971. In my opinion, Hemingway’s still has the best view on the Chesapeake Bay. 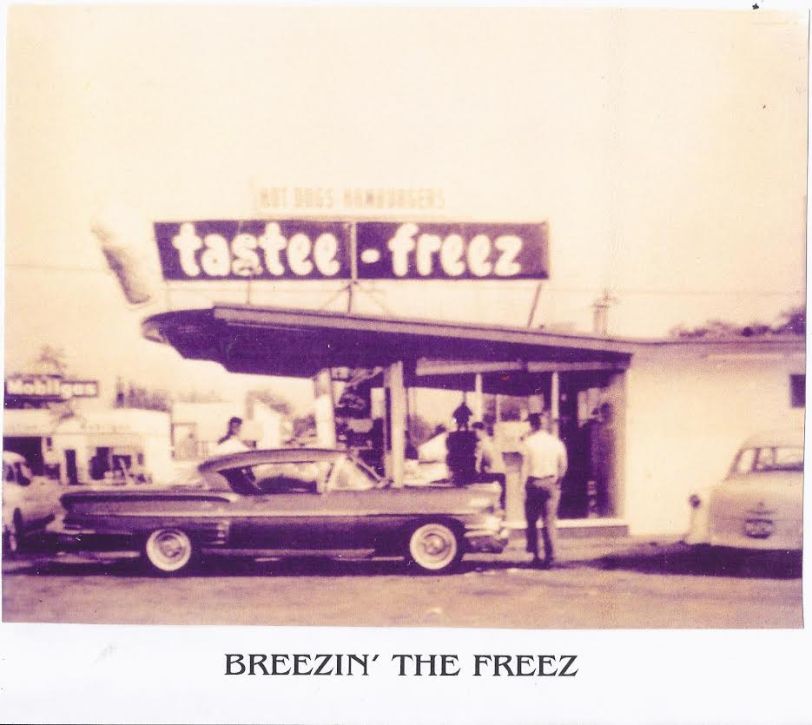 Joe Downey’s Tastee Freeze was a drive-in on the corner of Routes 50/301 and Cox Neck Road that served soft ice cream, hot dogs, hamburgers, and excellent fried chicken. For a Queen Anne’s County teenager in the 1960’s and 70’s, ‘breezing the Freeze’ with friends or having a first-date Tastee milkshake  was a rite of passage. 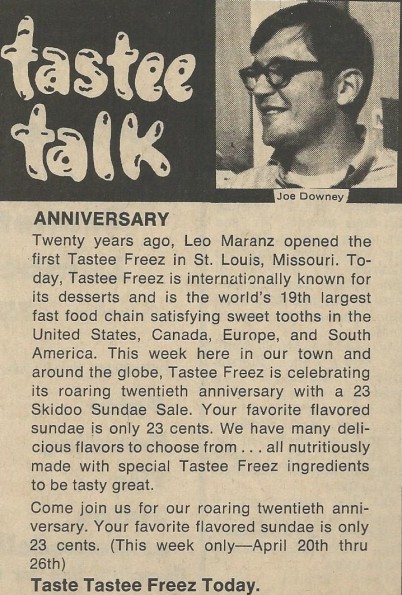 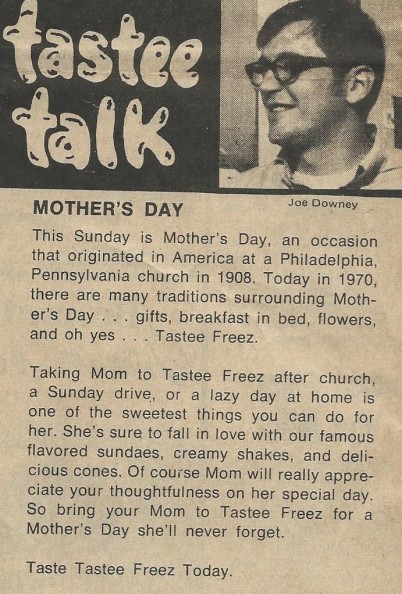 Dezes Inn was a popular fancy restaurant in the era of my youth, serving elegant dishes well beyond the simple pan-fried softcrab and homegrown tomato on white-bread sandwiches, field picked corn-on-the-cob and watermelon, and 3-layer chocolate Granny cakes that we were used to down our way.

I guess, one man’s delicacy is another kid’s whole summer menu. 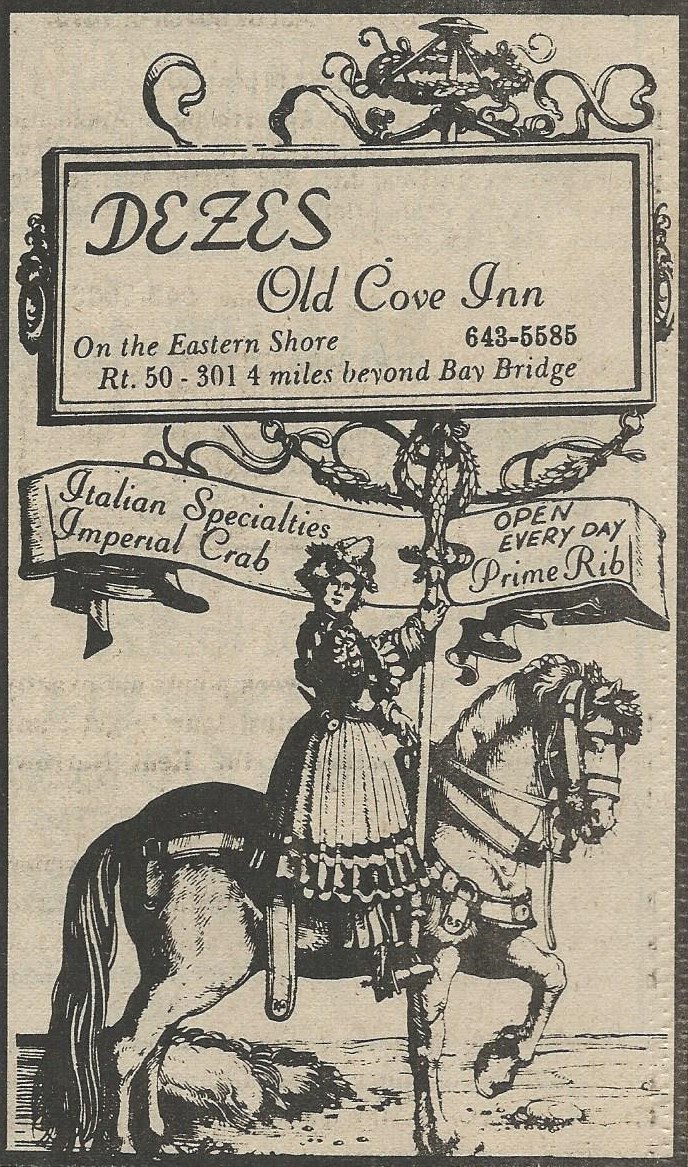 Once known as the Shamrock Inn, owned by Anna Haspert, and then her daughter Kate Barton, and before the Deze family took over,  Mr. Bill Ripple and his wife ran the Old Cove Inn there for a few years. The Old Cove was later renamed Bootlegger’s in honor of the location’s one-time notorious reputation. Though there is still a Shamrock Street, near Adam’s Ribs, 5 Guys, and the new IHOP,  the giant old building that had served thousands of customers over the decades has been lost to history for many years now. I tended bar there for a short time in the 80’s during a disastrous fly-by-night operation known as O.O. Forbes.

The upstairs had hidden passages, and the whole joint was believed to be seriously haunted. I never saw dead people. 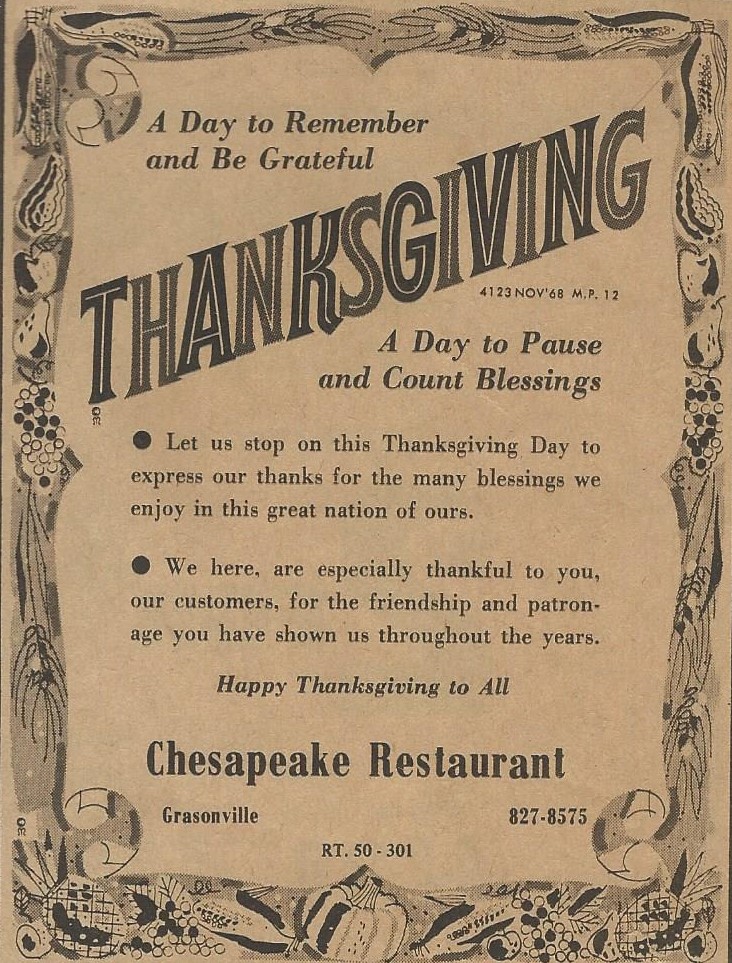 One of my first jobs was working as a busboy at Chesapeake Restaurant in Grasonville. Different owners have come and gone since, for a while the very popular Chesapeake Chicken was located there, but in recent years an antiques mall called Shipwrecked called the old building home. It, along with the 50’s-era row of hotel rooms that was part of the property,  was recently razed to make room for a new WaWa convenience store.

The back of this postcard courtesy of https://www.cardcow.com/ reads: 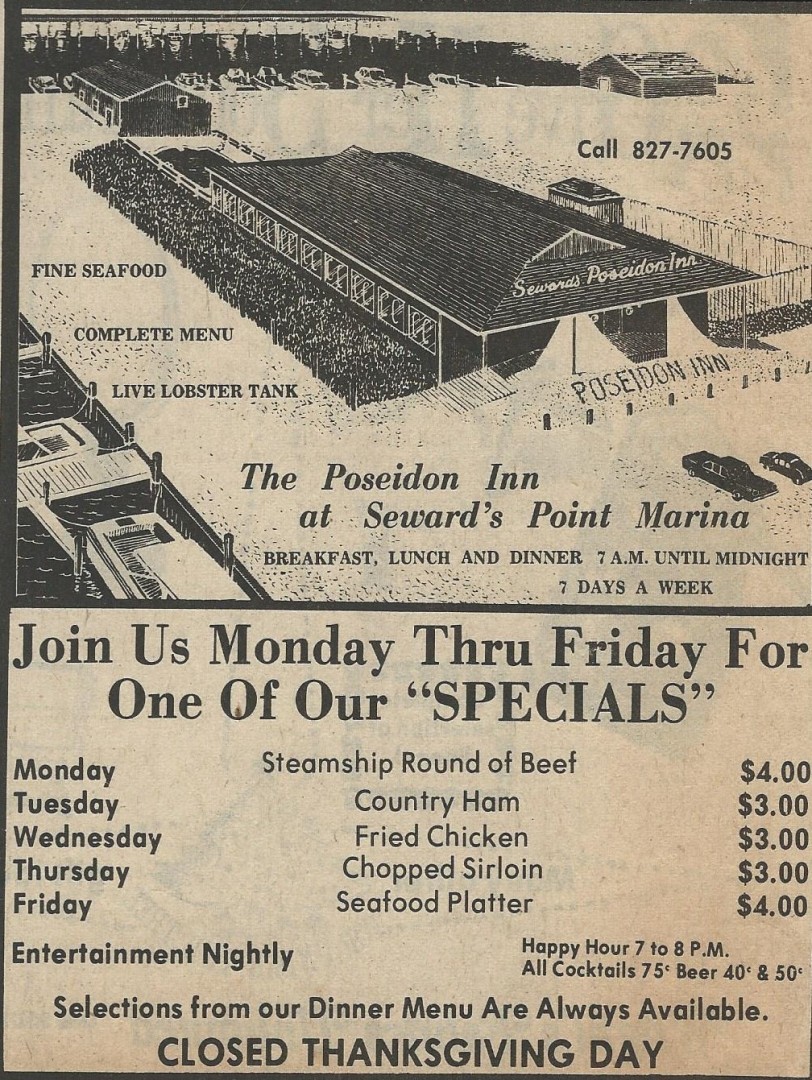 The Poseidon Inn was a popular restaurant and nightclub on Kent Narrows north where Annie’s Paramount Steak and Seafood House is now, near Harris Crab House and Seafood Restaurant and Red Eye’s Dock Bar. Portside is now The Jetty on the southeast side, near Bridges Restaurant, the enduring Fisherman’s Inn & Crab Deck, The upscale Narrows, and Big Owl’s. Ebb Tide Restaurant was originally located over the Kent Narrows Bridge in Grasonville, but later moved to a Kent Island location.  For a couple generations, Ebb Tide was THE place to go for local seafood and the four dollar crab feast. 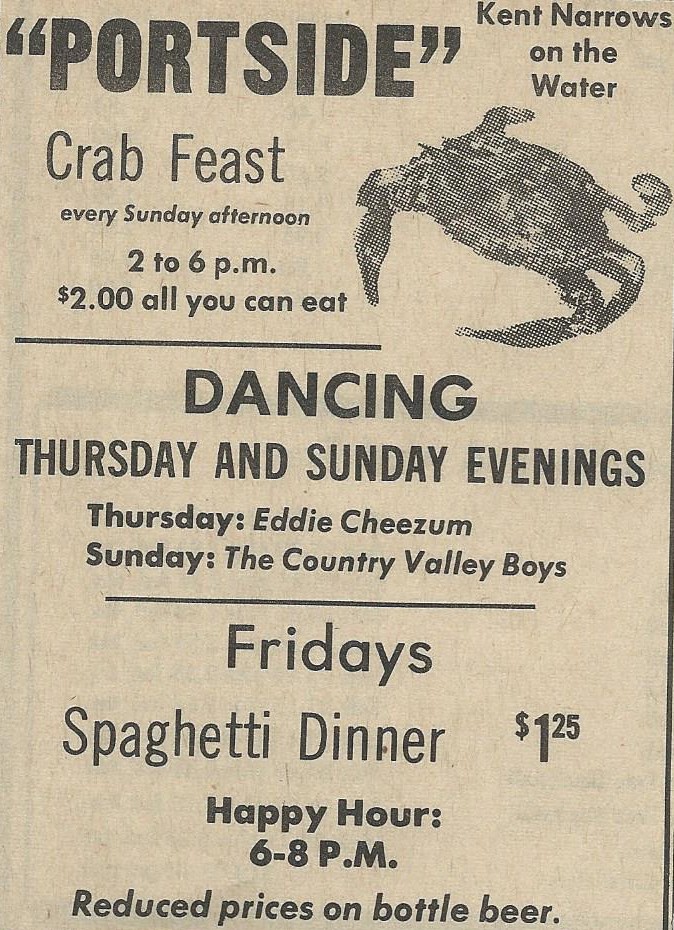 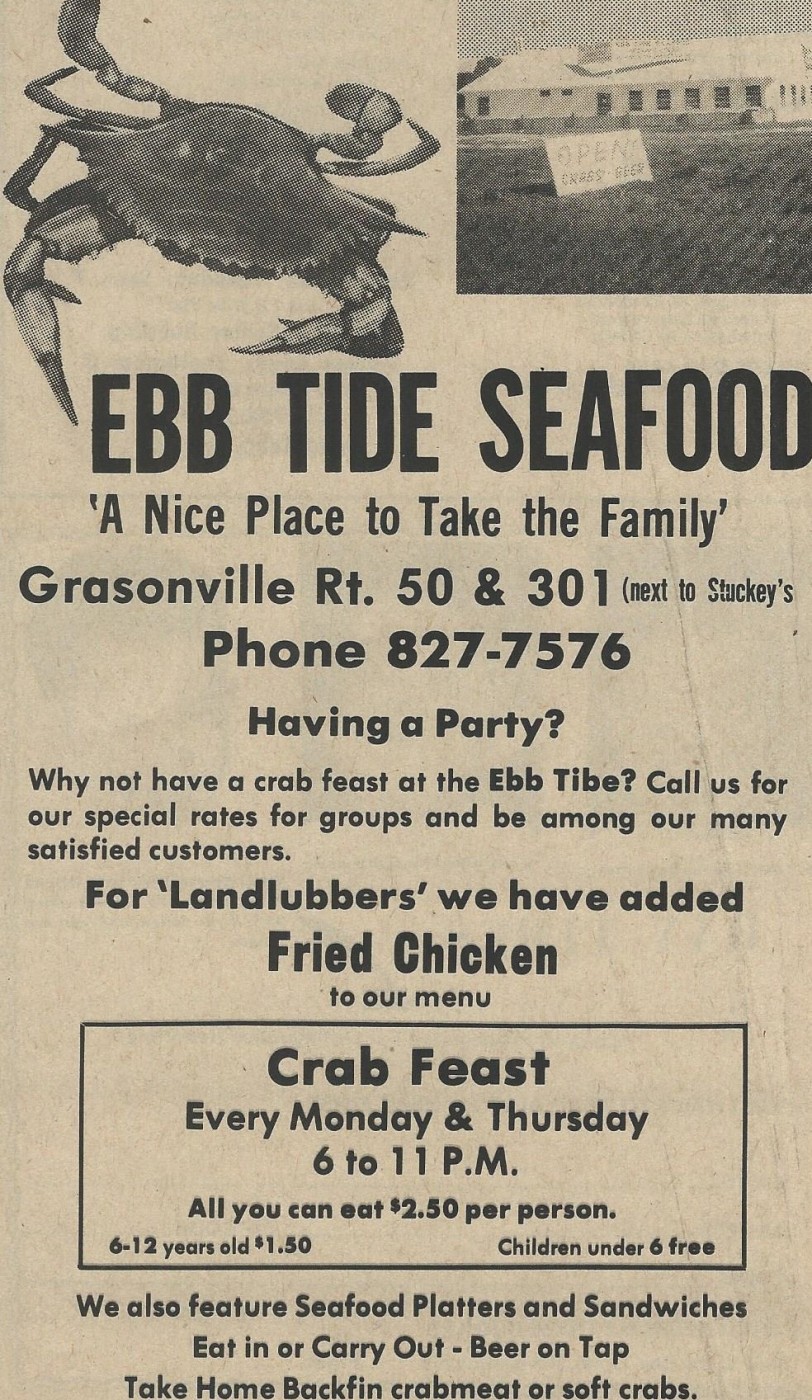 All ads courtesy of the Bay Times newspaper collection. 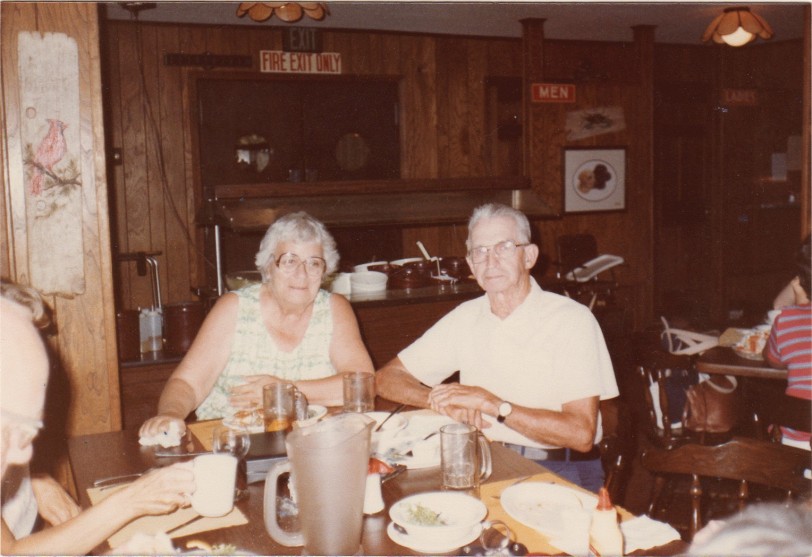