A HERITAGE OF HOSPITALITY – NO PLACE and DEJABLU VINTAGE 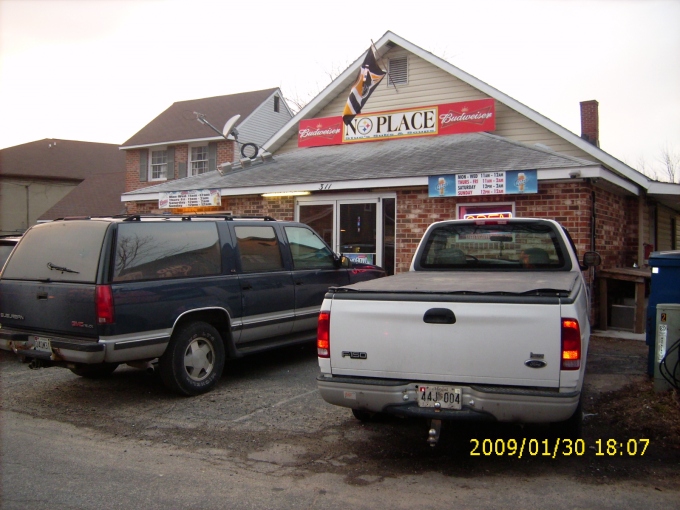 George and Shelby Grimes were the third owners in the history of the squat two-sectioned structure originally built in 1933 by a local doctor named Palmer for his son to run as a billiards hall. The second section, a two-lane bowling alley was added soon after.

George Grimes was born in Stevensville in 1934. As a boy growing up post-World War II, George worked hand-setting duckpins in Stuart Palmer’s pool room, and he stayed on when Palmer sold the business to Earl and Grace Stevens. Dr. Theodor Sattelmaier, an esteemed Kent Island physician from Germany, was a regular customer, and in a medical emergency, patients would send their loved ones to the poolroom to find Doc Sattelmaier if he wasn’t in his office. Both George Grimes and Alvin ‘Babe’ Grollman, another Island icon who grew up in the era, told me that Doc bowled so enthusiastically, he would routinely knock out the overhead lights.

George and Shelby Jean Gernert were high school sweethearts. George played sports, including baseball and soccer. Shelby was a member of the softball team and the Glee Club. They graduated in 1955, and in 1957 they were married.

The couple had three children. George worked as a waterman. Shelby was a bookkeeper for B&S Fisheries.

George and Shelby Grimes bought the pool room in 1974.

They conducted a poll to decide the name of their new business.

‘No Place’ edged out ‘The Office’.

Thirty years later, No Place was a trip back to a simpler time. Classic advertising, the real things, not reproductions, graced the walls, and an antique iron toy collection, along with the “oldest working shuffleboard on the Eastern Shore” were reminders of times gone past. Old time snapping turtle pie dinners had been replaced by holiday eggnog parties, but the feel of community inside that building seemed unchanged. Though the Grimes’ eventually expanded their libational offerings from just beer to hard liquor, as late as the mid-1990’s there was still no inside phone. If someone other than George or Shelby wanted to make you leave No Place they had to come get you.

A sign over the bar reminded patrons that the credit manager was Helen Waite.

If you wanted credit, you could go to Helen Waite.

In those days, now more than 20 years past themselves, some watermen would spend part of most days and some of most day’s pay at No Place. George and Shelby’s oldest customer, 85-year old Josh Bullen would sometimes stop by and say hi during his afternoon walk. At night, when all the other local restaurants and bars would close, their harried and ready-to-party servers would unwind at No Place.

No Place was a place where one might see a shirtless man in overalls and white rubber boots sitting next to a man dressed in a tuxedo.

The guy wearing overalls would be pouring his Heineken into a chilled pony glass.

The dude in the tux? Drinking from a bent-up can of Natty Boh.

George retired, and though ‘No Place’ was operated by new leaseholders for a while, the times had changed. Slowly, but they changed.

The No Place magic faded.

In 2014, for the first time in 40 years, the commercial property located at 311 Love Point Road changed hands. There is now an vintage retail store located there, along with evidence the new owners will be honoring the address’ past life as a funky little pool room that holds a special place in the hearts of four decades of customers who benefited from the No Place style of Eastern Shore hospitality. 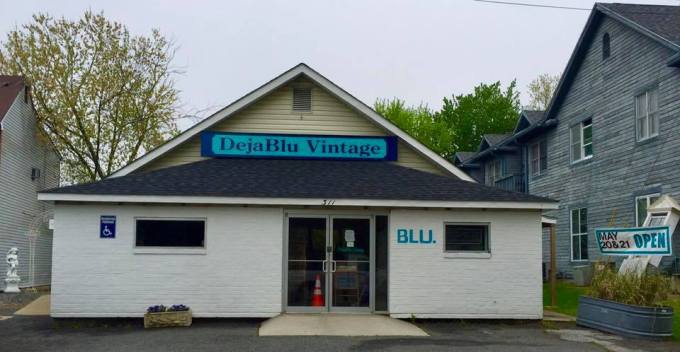 One of the building’s new owners, Terri Friedl, tells easternshorebrent.com that 311 Love Point Road is now home to DejaBlu Vintage, and that the space, though renovated, pays homage to the building’s roots by designing the sales and retail areas around No Place’s beloved bar.

Terri says that the updated interior features a tribute wall dedicated to George Grimes. “His portrait is hanging up,” she says, “and he is looking down at his old bar stool. We have a hand-painted sign that hung in No Place about George running from the Department of Natural Resources: “Thou shalt not covet potted crabs.” Also we have hanging the original No Place hot dogs and beer sign and one of the original pool table triangles.  We also have the shuffleboard table that will eventually be renovated and returned to its original home for display. Of course, none of these items are being offered for sale.”

What is for sale, however, is what Terri describes as “vintage, retro, nautical, unusual, over-sized and awesome items,” and curiosities she has collected over the last three years. DejaBlu has indoor and outdoor furniture, accessories, handcrafted items, jewelry, crafters “pickings,” and vintage garden statuary available.

DejaBlu also brings a new event-based shopping concept to Kent Island dubbed “Vintage Revivals”. These events are “a combination of pop up, barn sale, estate sale, and the ever popular Vintage Faires,” says Terri.  “Each Revival will be packed with freshly picked vintage and cool stuff… no Grandma’s Antiques here.”

DejaBlu Vintage is open this weekend Friday, December 15 to Sunday Dec. 17, open 9 to 5 each day, 10 am on Sunday.  You can find additional information and photos on their Facebook page, DejaBluVintage and on the web at www.dejabluvintage.com.