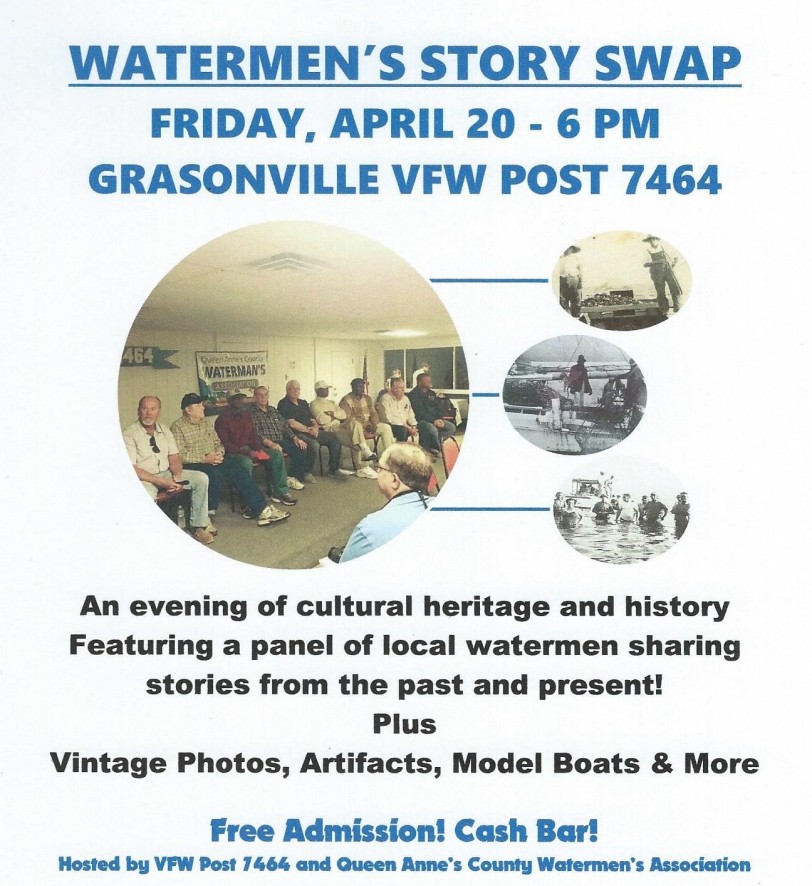 One of our storytellers for the April 20th Watermen’s Story Swap at the Grasonville VFW is Rob Newberry, chairman of the DelMarVa Fisheries Association. 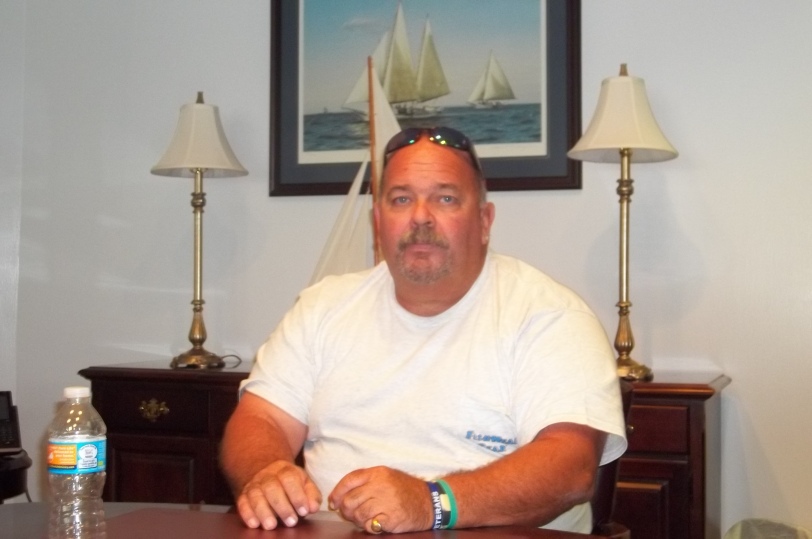 Rob Newberry grew up on the the water.

His dad was a professional tournament fishermen who fished all over the world.

Rob’s family moved to the upper reaches of the Chesapeake Bay when he was little. When Rob was ten, the Newberrys spent a summer vacation boating their way down the Chesapeake Bay from Northeast, Maryland to Rappahannock, Virginia. Rob would scout ahead in a 6’ runabout with a 10 mph Mercury outboard engine, meeting up with his parents and sisters on the family cruiser for at the marinas where they would spend their nights.

When he was 14, Rob’s parents bought Kennersly Farm in Queen Anne’s County’s, along with the Marina and Restaurant located there.  Rob went to College in New England and in Illinois, and worked at Woods Hole Oceanic Institution, Massachusetts. In 1979, he moved back to the family farm and began working on the Chesapeake, and in 1980, he graduated from The Chapman School in Florida, obtaining a masters upgrade on his captain’s license. He’s oystered, clammed, and crabbed in his career as a waterman.

Today Rob is a charter fishing and hunting guide, otherwise known as an outdoor entertainment professional. He’s also a storyteller.

“I used to work with a first mate, who has since passed, named Buster Elburn. Buster was a huge man; very powerful, very strong. He as good with people, a gentle giant. Great with kids. A storyteller. Whenever there was a girl on the boat, Buster would tell her, you’re going to catch the first fish and the most fish. She’d ask what do you mean? He’d say women always catch the first, most and biggest fish. Buster would cut bait and he knew the right way and wrong way to put hook bait on a tie. If you corner hook bait it just spins in the water. He’d tie everybody else’s bait that way and put hers on the right way and – boom – she’d hit!

“Buster had the patience of a priest. We were really catching fish one day. We had Amish guys on board. They can be really bad about winging fish over the side and saying, “Come take my fish off.” We’d say no, leave the fish in the water, and let the mate come to you to grab the leader and take the hook off. But they kept right on snatching those fish. Buster said, “Look, you need to stop this because if a hook comes off and goes in my face, I’m going to be very mad. Well, lo and behold, this guy snatches a fish out of the water and I hear “Unh.” Buster turns around and looks at me and he’s got a hook buried in his face. He looks at me and says real nonchalant, “Cap’, can you help me get this?” It looked pretty bad. I get my dikes (fishing pliers) out and go to cut it and the dikes (go crooked and lock up.) Buster pulls his hand away and he’s got the hook in his face and the dikes dangling down from the hook. It’s bad. Buster says, “Cap’, we got a problem.” I got a pair of pliers out and cut a length of 50 pound test line, tied two half-hitches on either side of the hook and ‘pop’ the hook out. Well, Buster’s on blood thinners. Blood starts squirting out of his face, it’s everywhere. He never winced. I took some liquid stitch and sealed him right up, but there was still blood everywhere. Buster went on back fishing. The Amish guy was sitting up in the cabin. I said, go ahead, man, go fishing. He said, “Oh no, I’m not going back out there. He’s going to kill me!”

“There was an incident a couple years ago just off of Rock Hall. The watermen had been iced in for three days and this one gentleman (Butch) broke a track and was heading out in a wooden hull boat with metal around it. Another boat was following, sailing out of Rock Hall, and not far from open water, the guy following (Dave) heard on the radio, “Man, I’ve got a problem.” As soon as Dave looked up Butch’s boat was going down, going down so fast that when Dave pulled alongside, all the Butch had to do was step off his stern onto Dave’s boat. Butch’s boat was straight up and down. It went down so quick he didn’t have time to put on his survival suit. He lost everything.  But if that other boat hadn’t been with him…

“The thing is, watermen will fight like dogs among themselves, and out on the water it’s a competition, bragging rights, who caught the biggest, who caught the most, that kind of stuff, but when something bad happens…I mean two guys can be fighting in a bar on Tuesday night, but on Wednesday, if one guy’s boat is sinking, that other guy is the first one there to help.”

According to their website: “The DelMarVa Fisheries Association logo,  created by artist/designer and Eastern Shore Native Ramon Matheu, aspires to represent the hard-working men and women of the seafood industry and the optimism in DFA’s mission to defend, protect and enhance the commercial fishing industry in the Delmarva region of the United States for present participants as well as future generations through all legal means – while maintaining healthy and sustainable stocks of fish.   The logo centers on the seafood harvesters, just as the heart of DFA’s purpose is to ensure and enhance the livelihoods of the region’s watermen and their families. 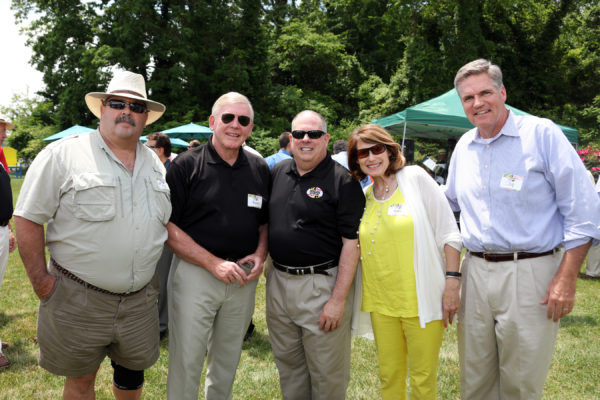 Rob and I, along with the other participating watermen and storytellers, hope to see you at the Watermen’s Story Swap on April 20th! 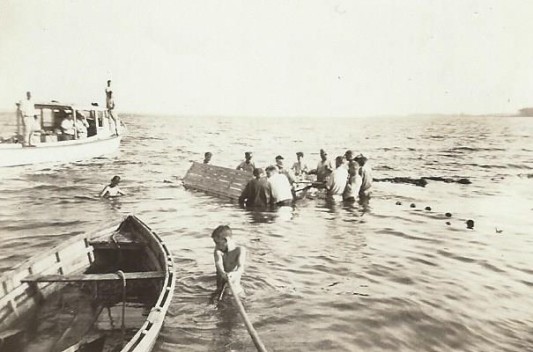 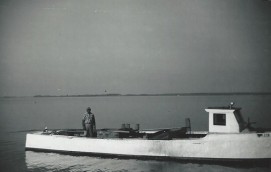 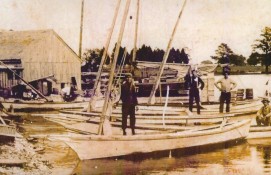 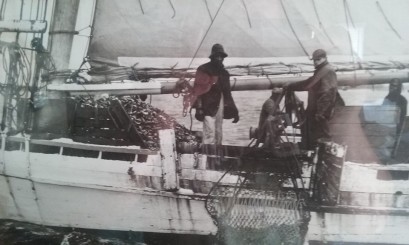