“I just didn’t expect anything that big.”

Preparing for the bad weather headed our way, Capt. Dashiell hauled his 40’ wooden fishing boat the Mary C. out of the water on Thursday, September 18. He wondered if the boat was blocked high enough, but the lift had already moved on to other business.

Dashiell dismissed his fleeting concerns. He left south Kent Narrows and drove to his home on Winchester Creek to wait the storm out.

“My first mate called to tell me my boat had floated loose. I couldn’t get out so he came and got me. We saw her from the (Kent Narrows) drawbridge and walked down from there. We forgot where the ditch was and ended up swimming a few feet.

“Her bottom was hitting ground. We tried to push her off but she wouldn’t budge. I climbed on board, started her up, and threw her into gear. I could feel the scag scraping bottom, but I headed for a little runoff of water and slid into the ditch by the side of the road. I knew I had to go for it. I felt a hard bump underneath when I crossed the road, but just kept going. I went through the parking lot at Fisherman’s Crab Deck and into their pond. There was a little drain between there and the restaurant. That was close. I got to the Narrows where the wind was howling and the tide rolling, and then out to Chester River. Worried about that hard bump, I stuck close to shore even though she never took on water. Eventually I anchored out in the creek behind my house. Now I always say next time I’ll just do that from the start.

Not the Mary C.. Photo taken by Mary Lee Brown. 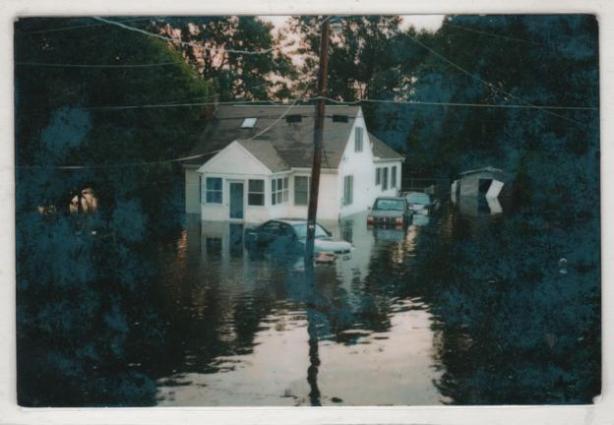